YOU ARE AWESOME! A BIG, YELLOW THANK YOU TO THE EMERGENCY SERVICES

Friday 20th September 2019, London, UK: An open-topped, double-decker, bright yellow bus will be driven all around London stopping at Ambulance Stations, Fire Stations, Police Stations and Hospitals giving out coffee, donuts and gifts to say thank you to the awesome men and women of the Emergency Services.

20th September 2019, will be a day to remember for all of the amazing people who protect us and save lives every day. The mission of the day is to permanently cement respect and gratitude from the public in the form of continuous kind gestures to the Emergency Services; like buying someone a coffee, a donut, or some other way of saying thank you. The more sporadic and unexpected the gestures are, the more special they will feel.

Michael Howard, Founder of The Awesome Movement said, “Following a BBC News article in September 2018 of notes being left on an Ambulance berating paramedics for parking over a drive whilst on an emergency call, I was shocked, but also made a realisation, we don’t show our appreciation enough. Almost immediately I created a group of like-minded individuals to help change the way that we as a country think about our awesome Emergency Services teams throughout the country going out and risking their lives to protect and save ours.”

Michael and his team of Awesome Appreciators will be driving an open-topped bright yellow bus all around London to shout about the amazing work that these brave men and women do every single day. Starting at 0630am at London Ambulance HQ, Waterloo Road, SE1, they will be visiting Ambulance Stations, Fire Stations, Police Stations and Hospitals giving out coffee, donuts and gifts.

Michael says, “Putting yourself in danger, saving someone’s life and dealing with harrowing events every day is unbelievable and worthy of our huge appreciation and gratitude. Our goal is to have a National Awesome Day every year, but more importantly we want the public to show their appreciation continually. For example; when you see someone from the emergency services, say thank you, buy them a coffee, make them feel appreciated.”

The Awesome Movement was founded in 2018 in London, UK by Michael Howard as a response to the horrific statistics relating to how Emergency Services staff are treated.

Press release distributed by Pressat on behalf of Awesome Movement, on Monday 9 September, 2019. For more information subscribe and follow https://pressat.co.uk/

[pdf]
PDF of the full press release with images

[pdf]
List of locations to be visited on 20th September 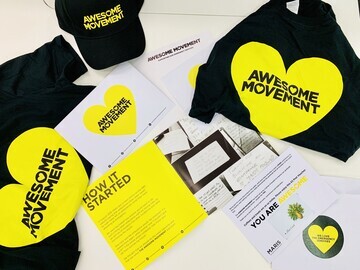 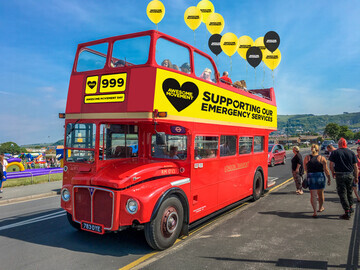 YOU ARE AWESOME! A BIG, YELLOW THANK YOU TO THE EMERGENCY SERVICES