The definitive account of the Post Office Horizon IT Scandal will be published in hardback and e-book by Bath Publishing on Thursday 18 November.

The book’s author, Nick Wallis, is available for remote or in-studio broadcast, print and online interviews for publication any time on or after 18 November. Journalists who wish to cover the launch event are invited to attend.

Here is what readers are saying about The Great Post Office Scandal:

“Nick’s narrative has the power of a great thriller as he lays bare the lies and deceit that has ruined so many lives.” Dame Joan Bakewell, Journalist and broadcaster

“Nick has come to understand the ultimately destructive management culture which pervaded the Post Office from the top down.” Tom Hedges, former Subpostmaster

“A tale brilliantly told by Nick Wallis, who has dedicated years of work to establishing what happened, why it happened and calling those responsible to account.” Rev Richard Coles, Presenter

For more information, to request a review copy or to attend the launch event, please call David Chaplin at Bath Publishing: 01225 577810 or email david.chaplin@bathpublishing.co.uk

Between 2000 and 2015 the government-owned Post Office prosecuted more than 700 Subpostmasters in the criminal courts using IT evidence which was later found to be the product of an unreliable IT system called Horizon. The Subpostmasters (who run local and village branches) lost their livelihoods, savings and many were sent to prison. Some took their own lives. Many still suffer with mental health problems.

In April 2021 39 Subpostmaster convictions were quashed in a landmark judgment at the Court of Appeal. The court found the Post Office knew its system was unreliable, but hid the evidence for years. A total of 63 Subpostmasters have had their convictions quashed to date. Many hundreds more could follow. No one has yet been held accountable either for the false prosecutions or the cover-up.

Nick has been following this story for more than a decade, and has written a “factual thriller”, detailing every twist and turn.

10% of the book’s income will be given to Subpostmasters via a soon-to-be launched fund.

Nick Wallis is a freelance journalist and broadcaster. He has made two Panoramas on the Post Office Scandal and his Radio 4 series - The Great Post Office Trial - has won several awards. In 2020 he co-authored the Private Eye Special Report - Justice Lost in the Post - with Richard Brooks.

Bath Publishing Limited is an independently owned publishing house, active mainly in law books for both professionals and for those who are caught up in the law but need help. The Great Post Office Scandal, though a departure from their mainstream books, furthers their mission to make law and legal processes more open and comprehensible for the lay reader as the book brings to life the pressures of litigation. 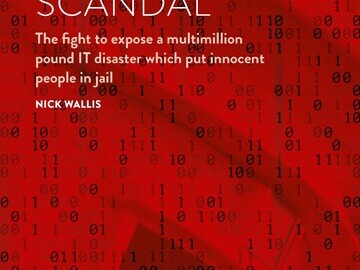 picture of subpostmasters gathering outside the High Court 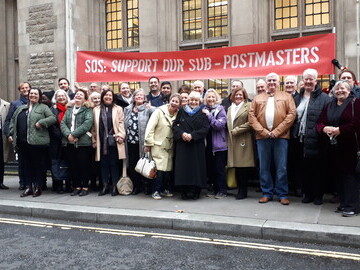