Solomon O.B. is himself a former foster child, having been taken into care with his brother Sam and sister Anu when they were all babies. And his winning Slam Championship poem – Unorthodox Beginnings, is a celebration of his positive experience of being fostered and a moving tribute to his foster parents.

Solomon said: “I was honestly a bit overwhelmed when I was asked to be an ambassador for TACT. It's a big honour but I plan to do the role justice. I really want to provide a strong example for kids in care and change perceptions around what it means to come from the care system. It doesn't have to be a limiting factor."

Solomon has kicked off his ambassadorship by performing at a TACT Children's Champions event where he met young people in care who get together several times a year to share their experiences and help shape TACT's range of services for children and young people. One foster child aged 15 summed up meeting Solomon as “really inspiring".

Andy Elvin CEO of TACT said: “Not only is Solomon an incredible talent, he is a lovely man, and a shining example of the power and effectiveness of foster care. There are thousands of young people just as wonderful, able and talented as Solomon in foster care and TACT want the public to understand that the bad news stories are not who foster children are"

Solomon remains close to his foster parents Victor and Patricia Brooker who he calls 'nan' and 'grandad' and he adopted their surname as a Christmas present.

He said: “If we weren't different skin colours you would have no idea we weren't related. They showed us the same level of love and affection and pure dedication to raising us as they would their own children."

You can see a video that Solomon has recorded especially for TACT about his experience of being fostered.

Emcee, Musician and Spoken Word artist, Solomon has recently been crowned Hammer & Tongue National Poetry Champion. A lover of dynamic displays of lyricism, O.B delivers passionate and engaging performances, challenging the status quo and constantly looking to push his own boundaries. Front man of the exciting Hip Hop & Funk collective that is Sounds of Harlowe, Solomon is now venturing out into the world of solo performance. Soon to release his debut solo EP 'The Writing is Real', he has also been chosen as one of the final six of BBC 1xtra & Roundhouse London's nationwide Words First Campaign.

Press release distributed by Pressat on behalf of TACT, on Thursday 14 April, 2016. For more information subscribe and follow https://pressat.co.uk/ 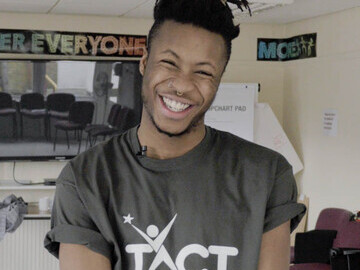