London, Thursday 28th April 2022 - Nano, the feeless eco-friendly cryptocurrency, was used for the first-ever crypto transactions to take place at an official event inside the Houses of Parliament. This took place at the launch of The Centre of FinTech at the University of East London, an educational institution with which the Nano Foundation has deep ties.

George Coxon and Colin LeMahieu, directors of the Nano Foundation, attended the official launch of The Centre of FinTech at the Houses of Parliament. At this event, George was confirmed as an Industrial Fellow to The Centre of FinTech, adding to her existing position as a founding member of the advisory board.

“London has long been the center of the financial universe, and with the advent of blockchain technology and the recent regulatory announcements concerning blockchain and cryptocurrency in the UK, we at the Nano Foundation see no sign of that changing,” said George. “Our relationship with The Centre of Fintech at UEL is all about equipping students with the educational tools they need to build an incredible career in the industries and fields of the future. Students who engage with the programs on offer at The Centre of FinTech will be uniquely equipped to blaze a trail in this exciting and dynamic new space, and the Nano Foundation will be right there with them!”

“There is a huge amount of focus on the wrong things for the wrong reasons, and some in the crypto industry have lost sight of the initial purpose of cryptocurrency” Colin added. “We play a different “game” to the majority in the crypto space, focusing on solving real-world problems, and building real relationships like the one we have with UEL. Being able to work so closely with the students who will go on to shape the future of the industry in the UK is an amazing opportunity, and one we are not taking lightly.”

The Nano Foundation has been cultivating a strong relationship with this new educational institution in recent months, collaborating with MBA students in a competition to redesign the nano paper wallet. The winners of this competition received their certificates on stage at the event which was also attended by Ron Kalifa, a prominent figure in the UK FinTech sector as the author of the Kalifa Review a Non-Executive Director at the Bank of England, and the Global CEO and Vice Chairman of WorldPay, as well as a host of other industry leaders and decision-makers.

Nano is sustainable digital money with instant transactions and zero fees over a secure, decentralized network. The Nano protocol is developed to be accessible and lightweight, with a focus on removing inefficiencies present in existing cryptocurrencies, making it ideal for everyday transactions.

The Nano Foundation is a non-profit organization with the purpose of developing and maintaining the Nano protocol while supporting the Nano ecosystem.

Since going live in 2015, 26 million individual Nano wallets have been created processing more than 136 million transactions on the network representing over $42 billion USD in processing volume without a single fee.

Press release distributed by Pressat on behalf of Nano Foundation, on Friday 29 April, 2022. For more information subscribe and follow https://pressat.co.uk/

George and Colin with Ron Kalifa 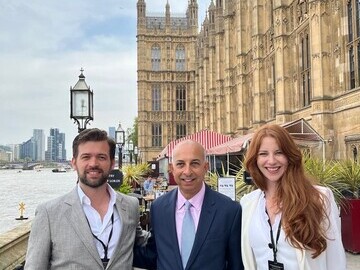 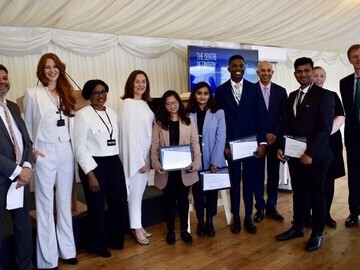 George and the other industry leaders in attendance 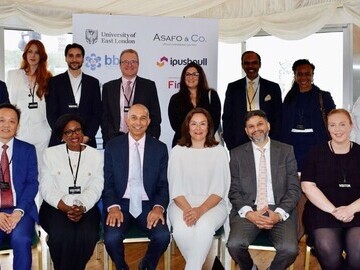