Is this the tree which inspired Handel?

News provided by The Conservation Foundation on Thursday 9th Jun 2022

A London Plane tree, which may have inspired one of Handel's most loved arias is still alive and well toda

"May fate prove kind to you, tender and beautiful leaves of my beloved plane / and may thunder, lightning and tempest never disturb your precious peace, / nor the preying south wind profane you. Never was nature’s / own shade more beloved or sweetly treasured than thine."

A London Plane tree, which is thought may have inspired one of the world’s best-known pieces of music over 300 years ago, is still alive and well today in South West London and once again inspiring musicians.

In 1712, when the composer George Frederick Handel first moved to London at the age of 27, he was invited to stay in a house at Barn Elms in South West London where the plane tree, now known as ‘Barney’ to locals, was growing.

The tree, planted around 1680, is not only London’s oldest plane, but one of the three oldest in the country. London Planes were very rare in those days and David Shreeve, director of The Conservation Foundation, believes this one may well have had a lasting effect on Handel. The composer included the aria to a plane tree ‘Ombra mai fu’, best known as ‘Handel’s Largo’, in his opera Serse or Xerxes, which was first performed in1738 at the King’s Theatre in the Haymarket.

Serse is being performed on Thursday 30 June 2022 as part of Opera Holland Park, by Figure, a young historical performance ensemble, with leading mezzo soprano Cecelia Hall in the title role. The Conservation Foundation has been invited to collaborate with the event as part of the celebration of its 40 years of championing some of this country’s most important and beloved tree species, including the plane.

In the opera, King Serse falls in love with the voice of his brother’s beloved, and tries to force her to marry him, singing of his love in ‘Ombra mai fu’.

The environment of the London which Handel would have known was much different to today. After his Barn Elms stay, he later moved to Brook Street, Mayfair where today, just a short stroll from his house, there is a fine collection of planes in Berkeley Square, but these were not planted until 1789 - 30 years after Handel’s death.

Whilst Handel may have been thinking of Oriental planes that would have been a significant tree in the near east including Greece and Persia and would have been known to Xerxes, David Shreeve believes the Barn Elms plane, which the composer would have seen every day during his stay, could very well have been the inspiration for ‘Ombra mai fu’.

“Trees inspire great affection and loyalty,” he explains “Every species has its enthusiasts who provide an awareness of the trees they love through a number of ways - publications, radio and television programmes, public events and guided walks”. Through the Heritage Trees programme, created for its 40th anniversary, The Conservation Foundation nurtures this dedication and love of trees so that future generations will be able to understand and explain the importance of trees and their role in biodiversity.

Figure was established last year in the wake of the lockdowns with the aim of expanding the scope of historical performance beyond the typical baroque and renaissance repertoire. It values the intimacy in performance above all, the connection which gives music meaning. Serse’s star Cecelia Hall has appeared at the Metropolitan Opera, Santa Fe Opera and Opera Frankfurt, and soprano Sarah Tynan, who plays Romilda, was recently nominated by the Evening Standard as one of the most influential artists in the UK and has appeared with London’s ENO and the Royal Danish Opera.

For further information and to book: https://operahollandpark.com/book-online/58601/

Press release distributed by Pressat on behalf of The Conservation Foundation, on Thursday 9 June, 2022. For more information subscribe and follow https://pressat.co.uk/

Photograph of Barney the London Plane by Clive Barda 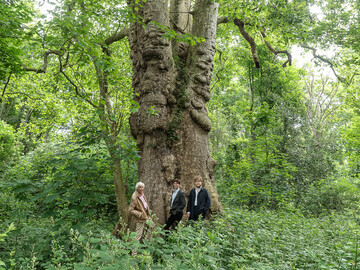 Is this the tree which inspired Handel?