News provided by Save Jamie on Thursday 14th Nov 2019

He has now been incarcerated for a total of six months with no end in sight to his unwarranted detention.

More than 14,000 people have signed a petition to the British and French governments urging them to listen to Jamie, a British boy nearly 11 years old who is currently shut away in a children’s centre on the edge of the desert near Dubai in the Middle East.

He has now been incarcerated for a total of six months with no end in sight to his unwarranted detention.

There is a great deal of concern amongst family and friends for his current physical and mental condition. He is now thin, translucently pale, and rarely smiles. His words are often difficult to understand through the uncontrollable crying and begs for help. His deteriorating physical condition runs in parallel to his increasing depression.

In the children’s centre, Jamie, without any legal support or an advocate, has been subjected to several distressing, pressurising and intimidating visits from up to six French consular staff at a time, bullied and threatened until he cries, in contravention to his human rights and the UN Convention on the Rights of The Child.

Last year, at 9 years old, Jamie was confined by the Authorities and his mother for more than a month in the same children’s centre, when on arrival to visit his British Father in Dubai, he announced that he was never going to live with his mother again, citing physical and mental abuse. Although he was temporarily released just before Christmas 2018, he was again detained in July this year as French authorities planned extradition to France ‘with use of force’.

Documents confirm what the rest of the family have feared for some time, that Jamie’s French mother has ‘deep-seated, long-running recurring psychological behavioural personality disorders’ that make Jamie terrified to live with her. Many people have witnessed his mother’s violence towards Jamie and he became so depressed when he lived with her that he developed suicidal thinking.

Jamie is determined to have his voice heard, however he is desperately he struggling with his situation. His family are extremely concerned that he will look for a different ‘way out’ of his desperate predicament.

Members of the family have been speaking with the British Foreign Office, but it appears as though the UK Government has done absolutely nothing to ensure that Jamie’s fundamental human rights are being cared for. At nearly 11 years old Jamie is of the age of discernment for his concerns to be heard legally in this matter but the French authorities, who claim jurisdiction over his life, will not listen to him or acknowledge his fears and distress.

Jamie’s grandmother, Mrs Fiona Oomes, said “Despite his physical and mental health deteriorating rapidly, his resolve remains strong; he is absolutely adamant that he could not bear to live with his mother in France. Her aggressive, controlling and violent behaviour had caused his life to become intolerable.

“At any time his mother could arrange his release from the children’s centre. How could anybody do this to a child; how could anyone stand by whilst a child suffers so unnecessarily. There is simply no excuse to treat a child this way.”

Jamie has been incarcerated in the Arab children centre for a total of six months. He was kept locked away throughout his long summer holidays, unable to see friends, travel, or to have a regular childhood.

Jamie has been subjected to days of interrogation at police stations and courts in Dubai, by psychiatrists, social workers, police, court officials and French consular staff. He has been forced to spend many traumatic, distressing days with his mother to the extent that he was hospitalised to stop him vomiting due to anxiety. He is still vehemently refusing to live with her. The reports from psychiatrists and social workers, that clearly express Jamie’s concerns, are being ignored by French courts whose jurisdiction over Jamie’s life is highly questionable.

Jamie is alone. There is absolutely no-one to help him. He is a child alone in a foreign environment. He has no family ties or relationships to the Middle East but he is being detained there against his free will by his mother and the French authorities.

Jamie has the right to be represented by his own lawyer. He has the legal right to have his voice and opinions heard by the Judge. However, despite his pleas, Jamie’s fears are not acknowledged by the French family court.

The Arab children’s centre has 25 foot high walls and has been described by some as ‘a cross between a jail and an orphanage’.

Jamie was born to a British father and a French mother. Jamie’s father and his family come from Northumberland, England and his mother from Marseille, France.

Press release distributed by Pressat on behalf of Save Jamie, on Thursday 14 November, 2019. For more information subscribe and follow https://pressat.co.uk/ 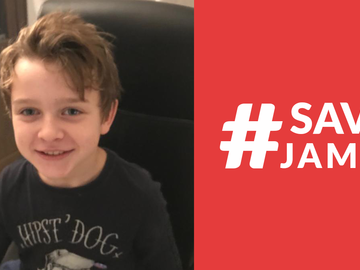