China has stationed its People’s Liberation Army in the Gwadar area and wants to permanently use our ports for military purposes, said Hyrbyair Marri

London, United Kingdom: The Free Balochistan Movement (FBM) has organised a week-long sit-in protest in front of the Chinese Embassy in London against China and Pakistan's exploitation of Balochistan and it’s people. Baloch protesters demonstrated day and night for seven days, from 25th September until 1st October on Chinese National Day.

The protesters demanded that China must stop being Pakistan’s partner in crime against the people of Balochistan. ‘Communist China and Islamist Pakistan have now joined hands for exploiting, looting and colonising Balochistan. Punjabi rulers of Pakistan sold the natural resources of Balochistan for a dirt cheap price to China, including the Saindak Gold and Copper mines in Chagai district and the strategic Gwadar port’ said an FBM spokesman . Gwadar port is a key strategic port located on the shore of the Arabian Sea near the Iranian border. Militarily Gwadar port would help the Chinese control the Strait of Hormuz and monitor American fleets in the Arabian Sea.

China has invested 46 billion dollars in the China-Pakistan Economic Corridor (CPEC). China wants to link Balochistan’s Gwadar deep seaport to Kashgar city, located in China’s north-west province Xinjiang. The Free Balochistan Movement termed the CPEC as the Corridor of Death and Destruction and said it would only help Pakistan and China to further colonise Balochistan and suppress Baloch nation.

An FBM spokesman further said: during our seven day protest we received moral support and solidarity from all around the world. A Large number of people participated in the last demonstration in front of the embassy. Members of Free Balochistan Movement carried placards which scribed slogans against China and Pakistan. They chanted China and Pakistan and demanded that Pakistan Army and China must withdraw from Balochistan.

While speaking to the participants and supporters, Hyrbyair Marri, the leader of the Free Balochistan Movement said that 'Pakistan occupied our sovereign state seven decades ago, they colonised our country and now Pakistan is sub-letting our territory to the Imperialist China’. He further said that ‘China has stationed its People’s Liberation Army in the Gwadar area and wants to permanently use our ports for military purposes.’ He condemned China’s aggressive policy in Southeast Asia and term China’s foreign policies as imperialist design. 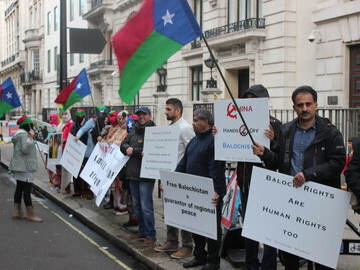 China has stationed its People’s Liberation Army in the Gwadar area and wants to permanently use our ports for military purposes, said Hyrbyair Marri