Keystone Property Group is one of the fastest-growing real estate investment firms in the UK.

Work is set to get underway on one of Keystone Property Group’s largest developer-lending private rented sector (PRS) projects.

In September 2019, Holloway Head was sold to Invesco in a forward funding agreement. Invesco is one of the world’s leading investment managers, controlling over £800 billion worth of assets

The homes are expected to be managed by US BTR giant Greystar. With construction of the first phase of the development predicted to begin later in 2019.

Keystone Property Group’s other Birmingham projects include Westminster Works, on which work began earlier in the year. Exited in 2018, investors were awarded an average 21% return.

Holloway Head will see the regeneration of a 1.3-acre brownfield site, which had remained vacant for 25 years. Planning permission was granted in May 2018.

“With demand rising, there’s a real need for high-quality living spaces in the city centre. That one of the world’s biggest institutional investors has purchased the development, is a testament to the calibre of our developer lending projects.”

Specialising in traditional and alternative property investment opportunities, Keystone Property Group bridge the gap between developers and investors. The Group source and create exclusive high-return prospects that meet the demands of the modern investment market. Working with both world-leading developers and an extensive network of national and international property investors, both parties are rewarded with services they require, including development, development acquisition, and developer level returns. Raising £60 million over a three-year period, and delivering clients average returns of 19.4%, Keystone Property Group is one of the fastest-growing real estate investment firms in the UK. 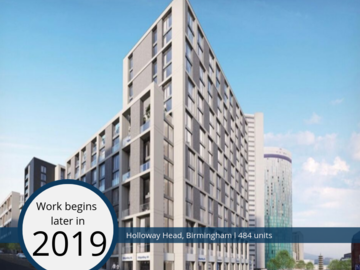