KIND-HEARTED staff at a Worcester garage have converted a camper van to left hand drive for a charity’s epic journey to deliver prosthetic limbs to amputees in West Africa.

A convoy of vehicles driven by representatives from the Bristol-based charity will be travelling through France, Spain, Mauritania, Senegal and The Gambia as part of the Plymouth to Banjul Challenge, which begins on December 26. After the van arrives in The Gambia around three weeks later, it will be used to transport schoolchildren and residents.

Worcester’s Mobile Mechanic director David Connellan said: “Converting the van alongside our usual repair, servicing and MOT work has been challenging but ultimately rewarding. We’re immensely grateful for the support of our suppliers, many of whom have donated parts free of charge to the project and look forward to tracking the Bongo on its long journey south.”

Legs4Africa founder and project manager Tom Williams added: “It's inspiring to see so many people and businesses come together to make a huge difference to people’s lives.”

Worcester’s Mobile Mechanic has supported many good causes since it was founded 26 years ago. Mr Connellan and his wife Sue are trustees of the Glory Baptist Project, which supports three schools in The Gambia. Money raised from the sale of scrap metal pays teachers’ wages and covers the cost of books and toys to be sent to the country via a container.

Press release distributed by Pressat on behalf of Legs4Africa, on Tuesday 19 November, 2019. For more information subscribe and follow https://pressat.co.uk/ 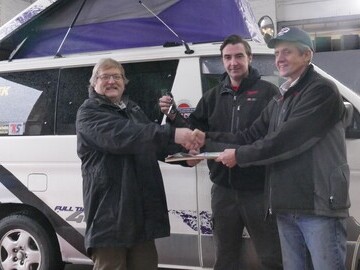