Myra’s Story is an award winning one-woman play tracing a day in the life of homeless Dublin street drinker, Myra Mc Laughlin. While set in Ireland, its Derry based author, Brian Foster, emphasizes that it could just as easily be set on the streets of New York, Melbourne, Toronto or London.

In 2018, Brian is looking to set a new world record for theatre with his ground breaking play by having hundreds of performances take place across the world … all on the same night. The existing record is held by Stagecoach Theatre which, in 2008, ran 66 simultaneous performances of Glad Rags across UK, USA and Germany … raising £40,000 for charity.

So, in 2018, completely FREE performance rights to stage Myra’s Story will be issued worldwide to theatre companies (amateur and professional), individual actors, producers, directors etc. To qualify for these free performances, all participants must agree to donate a minimum of 20% net revenue from ticket sales of their production to a local charity dealing with homelessness, alcoholism or drug abuse. They must also agree to schedule one of the 3 FREE performances of the play they will each be given for Friday, 16th November 2018, when the world record attempt will take place.

Brian Foster said: "We've had people in to see Myra’s Story from Europe, USA, Japan, Australia, you name it. They adore Myra and can relate to both her and her story as alcoholism and homelessness are universal. And Myra's backstory is also universal. When people look up at Myra on stage they see their brother, their sister, a friend ... quite often themselves, there but for fortune. I’m not seeking to make a penny for myself out of this project. Not a single penny. I know people will think a professional playwright mad for giving away free performance rights to his most successful play. But I know it’s the correct thing to do. If I can help others less fortunate than myself then that will be reward enough."

Seen now by 50,000 people, Myra’s Story has had 165 performances earning 165 standing ovations. In 2016 it performed at the world’s most prestigious celebration of one-person plays, New York’s United Solo Festival, where it won Best Tragedy Award against top international competition. Audiences are spellbound as Myra takes them on a rollercoaster-of-emotions journey charting her decline from fresh faced happily married mother with a new baby and all to live for, to the shabby, homeless alcoholic she is today. Hers is a story that could happen to anyone so easily, making it so universally recognizable to audiences. It’s a bittersweet play. At times hilariously funny. At other times heartbreakingly sad. It requires a terrific actor to carry it off. But the end reward is huge, as audiences invariably rise to their feet to applaud a truly astonishing piece of theatre.

Brian Foster said: “So I want to hear from anyone interested in coming onboard. And it would be amazing to attract a big name celebrity to endorse the project, or a major charity willing to lend their endorsement. I need social media, bloggers, journalists, to talk and write about it. Myra’s Story can become, not just an unforgettable theatrical experience, but also a worldwide tool for generating funding for the homeless and addicted. But be warned. Myra lives on the street and speaks the language of the street. I pull no punches. Or rather, Myra pulls no punches. She is feisty, funny, foul mouthed, but oh so real. And her story is quite incredible.”

If you would like to join Brian in this exciting venture, contact him now giving brief details of yourself, where you are based etc, and he will email you the script of Myra’s Story. The only exclusion zone for participation is Brian’s native Ireland, where he will be touring his own new production of the play in 2018. 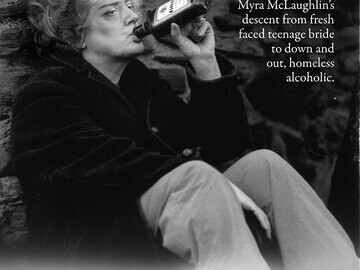