A unique contribution from The Queen

100 years after the first King’s Cup was raced, the much anticipated 2019 King’s Cup trophy has been unveiled in a moving ceremony at Henley Royal Regatta.

The Cup is made of highly symbolic material from each of the eight nations competing in this week’s historic event, including original copper roofing from the Royal Mausoleum at The Frogmore Estate on the River Thames, donated by Her Majesty The Queen.

The trophy was unveiled by the Chairman of the Kings Cup Organising Committee, Chris Hartley before 120 athletes from eight international defence forces.

“It is hard to overstate just how important and symbolic this Cup is,” said Mr Hartley.

“It is not only something of beauty, but it uniquely acknowledges the coming together of eight great nations in friendship and peace,” said Mr Hartley.

The Cup is made of Sterling silver with an outline reminiscent of the original 1919 trophy. It has a silver clad wooden turned base of eight sections from original Henley Royal Regatta booms. The unique golden line on the Cup traces the River Thames and its major tributaries with the Thames gold’ incorporating the eight national gifts. The placement of a single diamond on the ‘golden river’ represents the Henley Royal Regatta course.

The Chairman of Henley Royal Regatta, Sir Steve Redgrave, says the Regatta is honoured to be able to host the event.

“This regatta is 100 years on from rowing starting again after World War I – we were very honoured to do that then, as we are this year,” said Sir Steve.

The King’s Cup will see crews from the six original nations that competed in 1919 – Australia, Canada, France, New Zealand, the UK and the USA – joined by Germany and the Netherlands, competing in a knock-out format over the final three days of the 2019 Henley Royal Regatta.

The 2019 event will also create history by being the first time men and women in the military will row in the same boat at an elite international event.

Press release distributed by Pressat on behalf of JT Comms, on Tuesday 2 July, 2019. For more information subscribe and follow https://pressat.co.uk/ 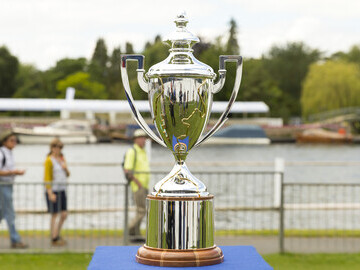