SWITZERLAND APPROVES THE FIRST ARTICLES OF INCORPORATION NATIVELY ON THE BLOCKCHAIN

Switzerland has approved the first articles of incorporation that allows a company to have its ordinary class-A shares on the blockchain. This might be a huge revolution for the financial industry because blockchain allows to launch an IPO and organize secondary market transactions without the involvement of many traditional players as: banks, financial intermediaries, broker-dealers, central depositary systems, notaries, etc. Furthermore, also the clearing and settlement functions can be decentralized using a smart contract.

The main difference with other security offerings on the blockchain is that the company has approved the first Swiss articles of incorporation that directly states the digital nature of the shares (tokens) and the use of the blockchain as the technology to keep the shareholders registry; meaning that the transfer of the company ownership can be achieved only with a transfer of the tokens on the blockchain and only the ownership of the token can give the status of shareholder.

The company has been advised by Andriotto Financial Services (www.andriotto.com) and it has used the Ethereum Blockchain and the smart contracts provided by EURO DAXX – the European Digital Assets Exchange based in Zug (www.eurodaxx.com), in the heart of the Crypto Valley. Overfuture has also deposited a prospectus in Switzerland (http://overfuture.io/) and the Overfutures shares can be seen on the blockchain here: https://etherscan.io/token/0xb346dBd1f9776C7dE7ab06271617f08b00AE4AA6

A huge difference when compared to the traditional ecosystem of intermediaries operating the capital markets sector, at least under three main aspects: costs, time and direct sale of the issuers to the investors. Some traditional regulated exchanges (ex SDX – Swiss Digital Exchange by the Swiss Exchange SIX) are already preparing themselves to a new digital way to distribute securities.

A company’s articles of incorporation natively on the blockchain may represent the first concrete step toward a huge revolution for the way companies access to the capital markets (and crowdfunding). 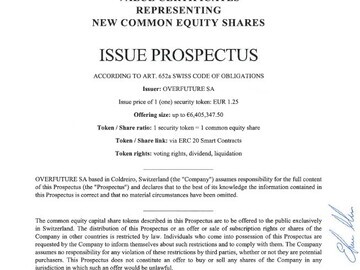 SWITZERLAND APPROVES THE FIRST ARTICLES OF INCORPORATION NATIVELY ON THE BLOCKCHAIN