Sinkhole at Wooburn Park – The Perils of Forgotten Mining

The 12-metre-deep ground collapse discovered in Sappers Field, Wooburn (near High Wycombe) on 29th February reveals a history of mining, hidden beneath the ground for over 150 years.

Sinkholes (or to be more specific, crown-holes) like this one have occurred multiple times over the past few years, with notable nearby examples at Fontmell Close in St Albans and Walters Ash in High Wycombe, representing a significant ground hazard across the region. Within the Home Counties, ‘brickworks’ or clay pits are often associated with the mining of chalk, which was turned to Lime and used in the brick or tile-making process.

Sappers Field has an extensive and long-lived history of extraction for brick clay, fire clay and chalk, with the first recorded reference to activity in 1847. Tile-making and brick works operations are recorded to have been active from the mid-19th Century through until at least 1925.

Literature and historic maps point to chalk mining at Sappers Field, with Lime Kilns and importantly two (possibly three) mine shafts, as well as speculation in the 1980s to an adit (or level) driven into the ground to access the chalk mine. All these mining features reveal a potentially large underground chalk mining operation. The clay pits and chalk mine became disused in the early 20th Century, later being infilled post-WWII by Sappers or retired soldiers, before eventually being used as a recreation field, as it is today.

The exact cause of the collapse is yet to be determined, however, reviewing similar examples, it may be that it is related to a previously unrecorded mine shaft (which were often only loosely backfilled or capped upon abandonment of the mine), or it could be that an underground mine tunnel has collapsed at depth, forming a hole at the surface.

Collapses above chalk mines often develop suddenly after periods of heavy rainfall, as water saturates the ground above hidden underground voids, that may have developed months before. The timing of the Sappers Field collapse, following a February that was the wettest on record, with up to 4 times the amount of average rainfall, the recent Storms Ciara and Dennis are potentially a key contributing factor in the sinkhole’s development.

Fortunately, in the case of this sinkhole, nobody was hurt, no properties were damaged, and no infrastructure was disrupted. However this is not always the case and it is likely that extensive investigations (probeholes and geophysical testing) will be required to understand the extent of chalk mining beneath Sappers Field, an expensive and time-consuming exercise that will fall under the remit of the Local Authority.

Historically, it would have been difficult to quickly or cost-effectively identify the cause or predict the likelihood of instability in locations such as Sappers Field. However, by interpreting and modelling a vast digital database of GeoData, experts in geotechnical engineering, geology and soil science can now reveal this insight to help identify, manage and mitigate the risk associated with ground hazards such as mining collapses.

“This is yet another example of a sinkhole developing in an area that has been extensively mined in the past. The timing of its appearance - during a period of significant rainfall - seems to be more than merely a coincidence and we suspect that more sinkholes like this one will appear in the future.”

Press release distributed by Pressat on behalf of Terrafirma, on Thursday 5 March, 2020. For more information subscribe and follow https://pressat.co.uk/ 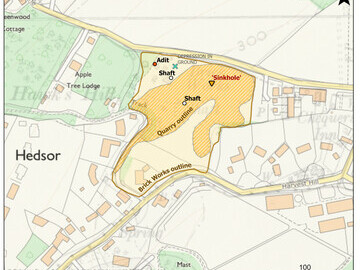 Sinkhole at Wooburn Park – The Perils of Forgotten Mining