We spend 2 months doing an in-depth report about worldwide sex trafficking. We’ve gathered data from 172 countries, and analyzed 109.216 identified victims. This is by far the largest study and most comprehensive on the topic.

Why is this report useful?

Lean back and prepare for news that is happening right now while you’re reading this report.

The results of the analysis

This section highlights the findings of the analysis.

There are conservatively 35 million that daily are victims of sex trafficking. The above heatmap illustrates where in the world we’re observing the most activity.

The green circles are where sexual exploitation is taking place. Here are countries in North- and West Europe together with USA and Asia leading areas. Especially countries like Poland, Turkey, the Philippines, Thailand, Cambodia, The Emirates, the USA, and Argentina.

If we dig deeper into the data we can see some interesting results in the regional areas.

52.36% of the world sex trafficking victims are happening in Northern America, and 84% of the sexual exploitation is females, 15% males, and 1% transgender. Looking further into the age and allocation between adults and children we’ve found the following:

Less than 0.5% of the total number of sex trafficking cases happens here. 65% female and 35% males are the victim-distribution.

0.92% of the total amount of victims comes from South America, and looking at the sex distribution we can see that; 72% of the victims are females, 28% males, and 0% transgender. The age- and majority allocation can be seen here:

0.81% of the victims happen in this region. But compared to other regions the gender ratio is a bit different. 58% are females, 41% are males, and 1% are transgender. Breaking it further down on age and majority, the data shows the following:

Kind of the same story for Western Europe as the Northern part. 1.09% of the total number of sex trafficking is going on in countries such as France, Spain, and Portugal. 78% of victims are females and only 22% males. The pictures are also intact as regards the age- and majority distribution:

Eastern Europe stands for 14.07% of the victims, and the gender distribution is a bit more aligned like we saw in Northern Europe. 53% of the victims are females, 47% in males, and 0% as transgender.

Looking into the age distribution we can see that especially the 30-38-year-olds have a mentionable part of the victims in this area:

Compared to the other European regions. The Southern has more cases of identified sex trafficking victims. Even though it’s a minor part compared to Northern America, it’s still x3 more than the other European regions. We see that 3.13% of the sex trafficking is happening here. And this region is also dominated by female victims (88%), and a minor amount of male victims (12%).

There are not many child cases. It represents 11% of the crime and the rest is adult victims (89%).

Here is 2.68% of the sex trafficking occurring. 57% are females, 43% are males, and 0% are transgender. Like most regions the majority is adult victims:

We don’t have that much data from this area. So it’s only 0.5% of the total amount of victims that we’ve been able to capture from this area. 67% are females and 33% are males. More interesting is that out of all cases child sex trafficking happens for 47%. That’s a really big portion and the biggest in all regions of the world.

In Western Africa is 2.81 percent identified as victims out of the total amount for the whole world. It has 63% females and 37% males, and like Middle Africa, it has relatively many child victims compared to the rest of the world.

Eastern Africa has 1.45% victims out of 100%, and it is distributed with 65% females and 35% males. Looking further into the age we find that the 9-17 years old are the age group with most identified victims. This region do also has a high amount of child sex trafficking cases.

This region stands for less than 0.5% of the total victims in the world. There are registered 61% female cases, and 39% male cases. As regards the age breakdown and majority distribution it’s quite similar to Northern Africa.

5.98% of the total sex trafficking is going on in Western Asia, and here are the females especially vulnerable (90%) compared to males (10%). Its the region with the fewest child trafficking cases (3%).

2.62% of the trafficking cases come from Central Asia, and it has like the European regions almost an equal-weighted distribution between female and male cases (51% to 49%).

1.02% of the sex trafficking victims happen in this region. 58% are females and 42% are males. More interesting is that almost 41% of the victims are between 9-17 years old.

1.29% of the identified victims occur in Eastern Asia. 86% are females and 14% are males. Compared to Southern Asia there are not many child victims.

7.97 % of the total amount of victims is happening in Souther-Eastern Asia. That’s a pretty big portion compared to how many people living there. Of the many victims, 54% are females and 46% are males.

Australia and New Zealand are recognized for their less than 0.5% victims and the fact that it’s the only region with more male victims (91%) than female victims (9%). And lastly, it has only adult cases.

Sub-conclusion to global- and regional overview

The above global- and regional overview gives some interesting insights:

Sex trafficking USA; the country where it happens

Since the USA is the area where most of the sex trafficking cases are taking place, we’ve together Neal Davis Law Firm looked into how the distribution is between the states. And as you can see Texas and California is having really many cases.

The development of the industry

There is no doubt that the industry is expanding and developing with the world. We see that in different ways e.g. that online recruitment is an increasing method during the pandemic (much more about this later on).

Sexual exploitation has an estimated market value of 99 billion dollars. Which means that it’s bigger than the global cocaine market. Also, it’s almost as big as the total global PC market. In other words, we have an industry that is really big. And it does not seem like it’ll stagnate in the coming years.

So why is sex trafficking practiced, when people know it’s illegal?

Sex traffic is primarily a money game. A lot of the victims do not enter this industry by their own choice. Its often because they are in a vulnerable time in their life where they meet people that take advantage of that situation. Sadly, data shows, that they are highly underpaid compared to the service they charge. Further, a lot of them are from poor environments where the masterminds pay families around 800$ to 2000$ for a daughter. Which is juxtaposed to a whole year’s income for many families in those areas.

The average annual profit for every woman in sex trafficking is 100.000$. The average for both genders is 21.800$. Further, the report reveals that sexual exploitation can yield a return on investment ranging from 100% to 1,000%. In the Netherlands, investigators were able to calculate the profit generated by two sex traffickers from a number of victims. One trafficker earned $18,148 per month from four victims (for a total of $127,036) while the second trafficker earned $295,786 in the 14 months that three women were sexually exploited.

There is a huge difference between the estimated number of victims and the actually identified victims. The identified victims are the cases that go to the police and often in court. But we know from research that the majority do not end there. It’s under 5% that is prosecuted.

That being said the identified victims statistics give a good idea about the development. So as you can see the cases are increasing significantly, and so are the earnings. Since 2014 we’ve seen a 60% increase in identified victims.

Press release distributed by Pressat on behalf of Bedbible.com, on Tuesday 8 February, 2022. For more information subscribe and follow https://pressat.co.uk/ 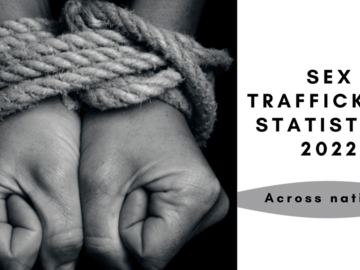