Men in the home nations weigh 13st 3lbs on average - and only guys in the US and Australia are heavier, figures show

Obesity crisis has turned the UK into the fat man of Europe! Men in the home nations weigh 13st 3lbs on average - and only guys in the US and Australia are heavier, figures show.

The UK is officially the fat man of Western Europe.

Government figures reveal that, on average, men from across the home nations tip the scales at 13st 3lb (84kg).

The figures, compiled today by Forza Supplements, add to the body of evidence that highlights the worrying obesity epidemic in the UK.

Organisation for Economic Co-operation and Development figures already show the UK has the second worst obesity rates in Europe - behind just Hungary.

The new report, using official data from the health boards of 10 countries, confirms the problem - and found men in the UK to be heavier than those in the Netherlands, Germany, Ireland, Italy, France and Spain. Spanish men weigh the least at 11st 11lbs (74.8kg).

The figures also delved into the life expectancy of men across the countries and how tall they are, on average.

Data also showed a stark difference in life expectancy, with men in the US expected to die four years earlier than men in some countries.

American men can expect to reach 76.9 years old - which experts have repeatedly blamed on the burgeoning obesity epidemic.

In contrast, life expectancy is 80.9 in both Japan and Australia - despite the latter also having a problem with bulging waistlines.

Men in the UK will die just short of their 80th birthday, on average, according to the data.

In terms of height, the data also revealed how the Dutch are the tallest - standing at 6ft (182cm), on average.

By comparison, Japanese men are reportedly the smallest - 5ft 7in (171cm).

Forza Supplements, said: 'These figures clearly show how obesity levels are going up all the time and this is impacting on male life expectancy. This is due to the increase in 'convenient' foods for the lives of busy people and unhealthy alternatives generally being cheaper to buy. The use of easy, healthy meals and meal replacement shakes to alter the lifestyles of the UK will benefit by not only providing the body with the nutrients, vitamins and minerals it needs, but in a controlled portion convenient for busy on the go people that don't have the time to stop. These can help support weight loss and reduce the risk of obesity within a healthy lifestyle as calories are controlled and people are left satisfied until the next meal."

'One in four British men is now obese and obesity levels have trebled in the last 50 years. On current estimates, more than half the population could be obese by 2050.

'We are clearly heading the same way as the US where the average man now weighs 14st for the first time in its history.

'Despite being one of the world’s richest nations, life expectancy in the US is lower than in many countries and the obesity epidemic is a big factor.

'The challenge for the next 50 years is how to ensure the positive benefits in public health are not destroyed by our love of food and drink.'

In a damning report issued in November, the OECD predicted that 40 per cent of people in Britain will be obese by 2030.

In Italy only 10 per cent are obese, France and Spain only 17 per cent and Germany 24 per cent.

The authors said the problem in Britain had undergone ‘a great increase since the 1990s’ - with obesity rates up 92 per cent. Even the US has only gone up 65 per cent in the same period.

Press release distributed by Pressat on behalf of FORZA Industries, on Wednesday 28 March, 2018. For more information subscribe and follow https://pressat.co.uk/

A graph displaying the obesity levels and life expectancies of men around the world. 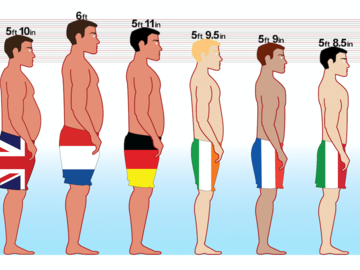