News provided by London Taxi Advertising on Tuesday 5th May 2015

London Taxi Advertising is delighted to showcase a fantastic new taxi advertising campaign in the capital. Working alongside the organisers of National Stationery Week, a fleet of iconic London black cabs has been adorned with stunning superside advertisements in an effort to 'Get Britain Writing.' It's the third consecutive year that LTA has coordinated a taxi campaign to celebrate National Stationery Week, with previous efforts delivering some fantastic results.

The campaign was intended to raise awareness of National Stationery Week, which celebrated the written word and all things stationery-related, between 27 April and 3 May. The week included the brilliant 'London Stationery Show 2015,' which was held at the Business Design Centre in Islington, as well as the launch of 'World Stationery Day' which took place on 29 April.

The bright and colourful superside ads were a perfect contrast against the traditional Hackney carriage's black exterior, guaranteeing a high-exposure advertising campaign which caught the eye of tourists, commuters and residents in the UK capital. With both sides of the black cab covered by the advertising creative, superside ads are the ideal format for launching high volume, short-to-medium term campaigns in cities and busy suburban areas.

Those interested in getting involved with National Stationery Week can do so in a number of ways, with one of the week's main aims to get people talking about stationery, writing products and the importance of the written word. For more information, head to @NatStatWeek on Twitter.

Press release distributed by Pressat on behalf of London Taxi Advertising, on Tuesday 5 May, 2015. For more information subscribe and follow https://pressat.co.uk/ 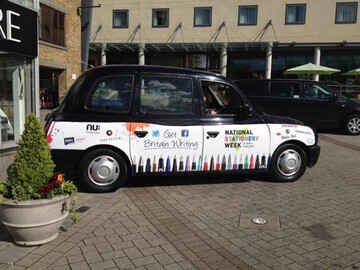 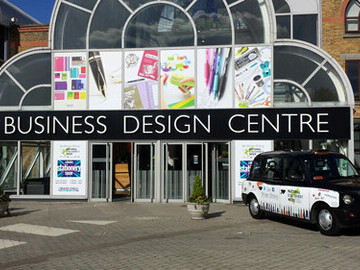