News provided by Powerscourt on Tuesday 26th May 2020

26 May 2020, London and Lisbon: Angolan prosecutors have submitted another piece of fabricated evidence in the decision to freeze the assets of Isabel dos Santos, it has been revealed.

A memo confirms a pattern of fabricated evidence used to secure an emergency court order to freeze her assets. Courts and authorities in Angola or Portugal (which also adopted the freezing order under a convention between the two countries) never tested the authenticity of the memo.

The undated and unsigned memo was attached to an official letter from the Angolan Intelligence Services to the National Asset Recovery Service. This was used by the Angolan prosecutor as evidence that Ms dos Santos was selling her stake in the Angolan telecom company, Unitel, to an unnamed investor from the United Arab Emirates (UAE).

The unsigned memo outlining the transaction also has no dates of events, details of where events took place, names of persons, or any correspondence between the parties. Nevertheless, it was used as “proof” to show the “imminent risk of dissipation” of assets, which is a required pre-condition of the Angolan Court to freeze assets under the country’s law. Without being able to establish this risk, the Angolan Court would not have granted - and had no powers to accept - the Angolan state’s request to grant an ex parte freezing order against Ms dos Santos.

As well as describing a fictitious story, the memo states that the businessman solicited “paid services” from Interpol agents. This means that Angolan Interpol agents would have broken the law.

As revealed two weeks ago, the courts also accepted an obviously fake copy of Ms dos Santos’ passport featuring Bruce Lee’s signature and an email trail that showed how an internet scam artist was trying to defraud a legitimate Japanese start-up. This memo is yet more fabricated evidence used in the same legal case.

The assets were frozen ex parte - meaning the defendant is not allowed legal representation - in December 2019. Ms dos Santos’ lawyers were only granted access to the judgement and the evidence on which it was based, including the memo, forged passport, and scam email chain, last month.

In a statement on 13 May, the Angolan attorney general confirmed the memo was key evidence in this case. He also did not deny that prosecutors have submitted forged documents, such as the false passport, to the courts.

Yet, the memo should never have been submitted or accepted as evidence. The many irregularities include:

The memo lacks any credibility, yet no effort has been made by the Angolan prosecutor’s office nor the courts to investigate the veracity of the memo. Ms dos Santos’ lawyers have written to Interpol asking for an investigation into these irregularities.

“The Angolan Attorney General based his case against Ms Dos Santos on the strength of fake documents. He should explain why that fake documentation was submitted and accepted by the court. The asset freeze should be reversed - and Portuguese authorities must be notified of that reversal - immediately.

“Failure to do so will further highlight that the Government’s agenda is purely political and not lawful. There has been a clear abuse of process. The Attorney General should act swiftly and save himself, Angola, and now Portugal from any further embarrassment

“In addition, Interpol should investigate the admission that a private businessman solicited Angolan agents for ‘paid services’.”

Below is a copy of the memo and the accompanying letter from the Director of Cabinet of the State Intelligence and Security Service to the Special Prosecutor responsible, including English translations. 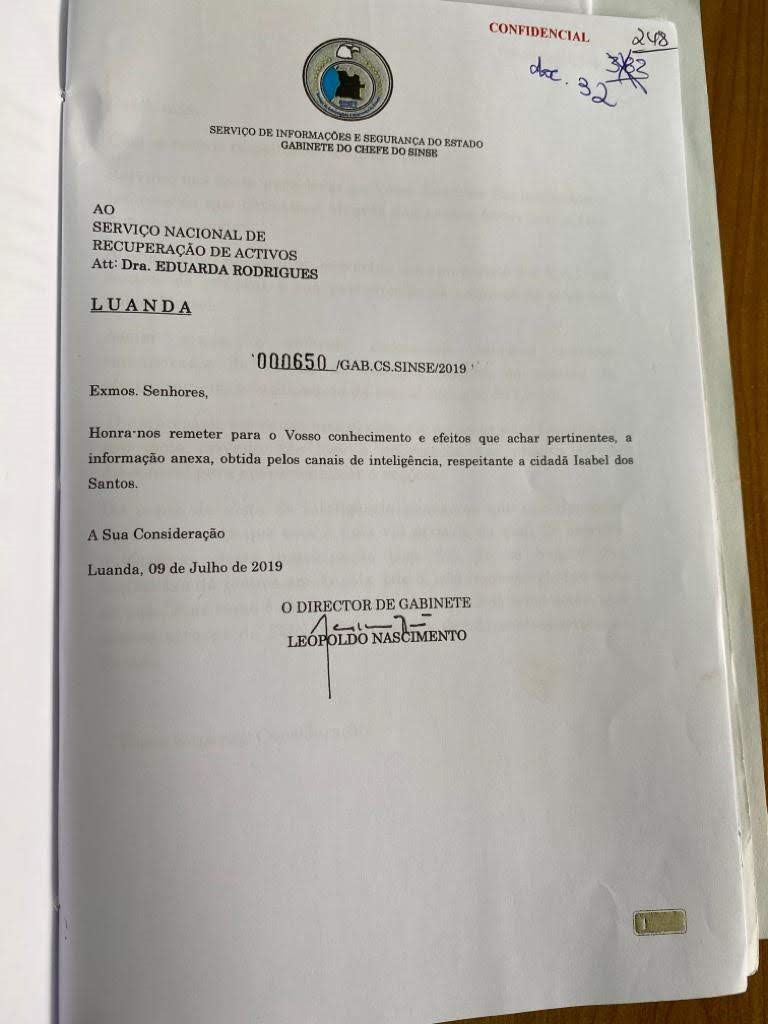 SERVICES OF INFORMATION AND SECURITY OF THE STATE

OFFICE OF THE HEAD OF SINSE

We have the honor to send, for Your knowledge and effects that you find relevant, the attached information, obtained by the channels of the intelligence service, concerning the citizen Isabel dos Santos.

DIRECTOR OF THE CABINET 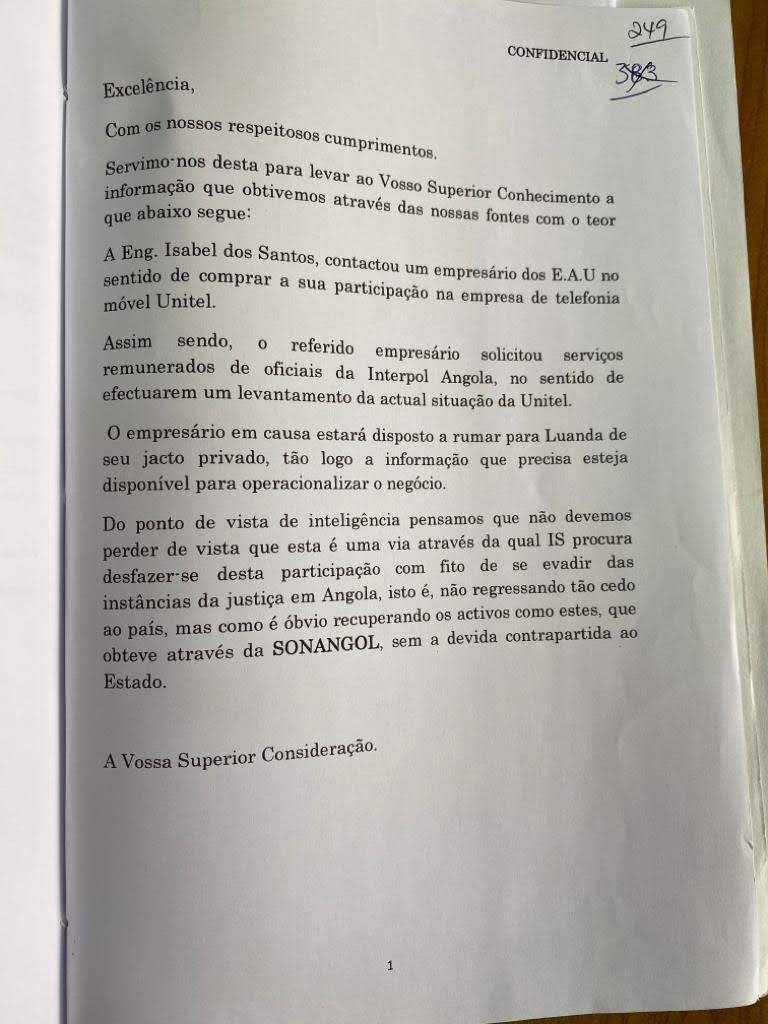 With our respectful greetings.

We here, by the present letter, bring to your Superior Knowledge the information, that we have obtained through our sources, with the content below:

Accordingly, that businessman requested paid services from Interpol Angola officials to carry out a survey of Unitel's current business situation.

The entrepreneur in question is willing to travel to Luanda in his private jet, as soon as the information he needs is available to operationalize this business.

From the point of view of intelligence services, we think that we should not lose sight of, that this is one way through which IS seeks to dispose of her stake, with the purpose of escaping the instances of Justice in Angola, that is, not returning to the

country anytime soon; but as it is obvious recovering assets like this one, which she obtained through Sonangol, without the due consideration to the State.

For Your Superior Consideration

Press release distributed by Pressat on behalf of Powerscourt, on Tuesday 26 May, 2020. For more information subscribe and follow https://pressat.co.uk/