Locked Down Knocked Up

Most people made banana bread in lockdown. We made a baby!

Locked Down Knocked Up:

Most people made banana bread in lockdown. We made a baby!

How would you feel if you found out that you and your partner were about to become parents for the first time? Excited? Scared? Surprised? Clueless? All of the above? That was definitely true for Rob and Gemma Howard. And throw in a global pandemic, then things get a little scarier.

After finding out they were expecting their first child together in June 2020, they soon realised that the national lockdown in the UK was going to throw a few challenges their way. With antenatal classes cancelled and no access to family support, the pair of radio DJs tackled it the only way they knew how… by starting a weekly podcast.

“As soon as we realised that we weren't the only new parents to feel like this we knew we had to do it. Locked Down Knocked Up is full of banter and is essentially about what it’s like to prepare for a baby you weren’t expecting in a time nobody was expecting!” said Gemma.

By sharing EVERYTHING they’ve learned about pregnancy, parenthood and themselves in these unprecedented times, Rob and Gemma hope to ease the minds of anybody else worried about becoming parents.

Gemma says; “Pregnancy is hard! I wasn't expecting the sickness to be as drawn out and constant as it was. I found myself worrying about the slightest twinge, too much movement, no movement, if I was eating right, sleeping right, doing anything right!”

As a father-to-be Rob has learned a lot too. “Gemma has had to go through so much. All the sickness, tiredness and her body changing... I feel bad that I am unaffected by it all. It feels a bit unfair that it’s so one-sided, though I’m not complaining!”

What to expect when you weren’t expecting

“Nobody tells you about the amount of Gaviscon you’re going to get through. I even keep one under my pillow just in case. I wish that somebody had told me that you really don’t need to feel like you have your sh*t together. Nobody does. Even the most organised people are probably panicking on the inside.”

“You get given a lot of different advice and it often completely contradicts what someone else has said. It feels a bit like one of Boris's confusing lockdown speeches at times…” Rob adds.

From wetting yourself in public and thinking the worst, to mistaking the baby’s leg for something else at a gender scan and exclaiming ‘IT’S A BOY!!’ (It’s a girl, Rob), the podcast aims to share the honest ups and downs of pregnancy with (quite a few) funny stories thrown in along the way.

The highs and lows

Rob said; “The hardest thing for me has been not being able to go to the scans and appointments with Gemma. It’s quite a nerve-racking time finding out if your baby is healthy and so you want to be there to support your partner but at the time, we weren't allowed. It also feels a bit ridiculous being sat at home playing Fifa instead of being there - but what else can I do?!”

Gemma says that not being able to see her family has been one of the hardest things about being pregnant during lockdown. “I'm not sure when they'll be able to meet the baby, as we all have to abide by new rules as they're announced! It's probably not a negative for them though, as they've missed all my moaning. It was also tough not having Rob at the appointments as there were a couple of scary moments, but so many women had that so much worse that I just feel very grateful. “

You can listen to Locked Down Knocked Up on Spotify and Apple Podcasts. The first episode is available from today (Feb 2nd 2021) with new episodes released weekly.

About Locked Down Knocked Up:

Locked Down Knocked Up is a fun, banter-filled look at what it's like preparing for a baby you weren't expecting, in a time that no-one was expecting. Rob and Gemma Howard are a married couple and are both radio DJs by trade.

In normal times they might have felt underprepared for parenthood, but throw in the UK lockdown restrictions, cancelled antenatal classes and no access to family support; they just felt completely clueless. However they soon realised they weren't the only new parents who felt like this, so they decided to make a podcast.

Listen to Locked Down Knocked Up on all podcast platforms. New episodes are released weekly.

Rob and Gemma live in Watford. Rob works at Capital FM, London and grew up in Stratford Upon Avon. Gemma works at Heart FM (West Midlands) and grew up near Liverpool.

Press release distributed by Pressat on behalf of Secret Recordings, on Tuesday 2 February, 2021. For more information subscribe and follow https://pressat.co.uk/

Locked Down Knocked Up Logo 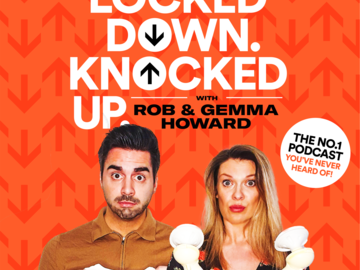 Locked Down Knocked Up