Kandu Arts Reel Film Festival - back to the Cinema for Community

We are delighted that this years Kandu Arts For Sustainable Development film festival in partnership with Reel Cinemas Chippenham will be screened in front of live audiences at the Astoria Reel cinema in Chippenham on Friday 17 September 2021.

After the success of last years, pandemic altered , online festival, this years festival marks the 10th Anniversary of the Premiere of Bash Street, the Kandu feature film - premiered at the Astoria in Chippenham and shown at Bath International Film Festival . A gritty look at life with over 100 members of the local community and including professional actors Con O’Neil - Uncle, Ordinary Lies, Happy Valley, Chernobyl and Jan Graveson.

Friday afternoon the festival will show case films from student film makers from Wiltshire College on the big screen for the first time. This session will be followed by several films in the late afternoon exploring issues around mental health and identity for young people, made by young award winning film makers both locally and nationally. Cuckooed, Pen, One to One, Vivid Blindness and the brand new “im not mental its mental” will feature for the first time. Young people can attend for free after school until the early evening.

From 7pm onwards the range and tone turn to more adult themed films with the screening of the feature length exploration of what lies behind the idyll of the British seaside - "Postcard from Perranporth", The music Video “Soul Sneeze” from Will Lawton and the Alchemist, "Hazed" - a new short film exploring race and language, "Man Goes for Mangoes" - an exploration of relationships lost and found - a true Kandu collaboration and of course - Bash Street as the final feature of the day. Tickets are available from the box office at Reel Cinemas Chippenham in advance or on the door but there may be limited availability so better to book ahead. We are very excited by this opportunity for so many in the community to come together and huge thanks to the festival sponsors - CoBuy, Trackss and Altlas Gym 24/7 and of course to Reel Cinemas for their continued support.

Press release distributed by Pressat on behalf of Kandu Arts, on Sunday 12 September, 2021. For more information subscribe and follow https://pressat.co.uk/ 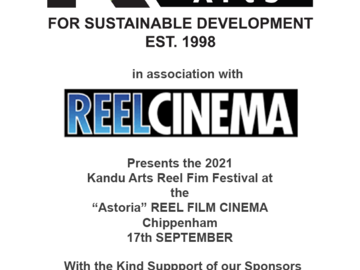 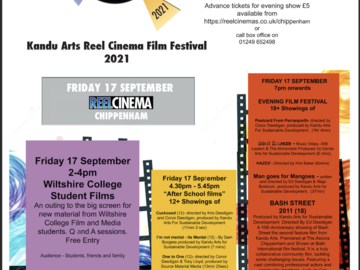 Kandu Arts Reel Film Festival - back to the Cinema for Community