Is £4.28 Million Mega Fortune Dreams Jackpot Due to Drop?

Mega Fortune Dreams is the largest jackpot available at the moment, and history suggests it's about to drop!

The 777 Casino team have been keeping a close eye on the biggest international, progressive jackpots again. With Mega Moolah and Mega Fortune still in the early stages of a rise having fallen recently, and the likes of Hall of Gods steadfastly refusing to drop, we've turned out attention to the middle ground. That's where NetEnt's Mega Fortune Dreams comes into play. The jackpot has soared way beyond £4 million - and there's evidence to suggest it could drop soon.

When we say we keep a close eye on the biggest online casino jackpots, we look at very factors. Which jackpots are worth the most at the moment? Is there a jackpot that hasn't been won for a disproportionately long time? Is one slot generating lots of heat? These are all valid questions that we seek to address.

However, another factor worthy of consideration is average win frequency. This magical little figure tells us how many days - on average - elapse between one jackpot win and another. Now, it will never be entirely indicative of a set pattern, of course because jackpot games are controlled by Random Number Generators, just like other video slots. But, can they be accurate?

What Can Average Win Frequency Tell Us?

Other jackpot slots buck the trend somewhat. however. Hall of Gods used to fall quite regularly and still maintains an average win frequency of about 160 days, but it's latest win came after nearly 6 months of inactivity. Arabian Nights is even more weird at the moment. Despite being won every 112 days on average, nobody has hit the big prize for nearly a year. Now, given that then jackpot has 'only' risen to just over £1 million in that time, it's clearly less popular, which may explain the lack of winners in that time. But Hall of Gods did rise to over £5 million before it tumbled.

Which Jackpot Slot Should You Play?

You'd expect many players will flock to Arabian Nights because a win is overdue. Others give up on such stubborn games, and stick to the likes of Mega Moolah and the Mega Fortune games because they tumble more often. There's no right or wrong in each approach to jackpot gaming. But if you go for the latter option, then take heed of these patterns.

Mega Moolah last fell less than a month ago (against an average win frequency of once every 58 days) and it's only four weeks since someone won the Mega Fortune jackpot (against a 64 day average). On that basis, Mega Fortune Dreams is the way to go. Not only is it's £4.2 million jackpot figure considerably higher, it is also 82 days since it fell against a 62 day average.

£4.35 Million Jackpot to be Won on Mega Fortune Dreams

The Mega Fortune Dreams jackpot seems to rise quickly and steeply these days, hence why it currently tops £4.35 million just over 2.5 months after it last fell. Indeed, it's been rising faster than Mega Fortune itself according to recent trends. It's a hot jackpot slot, there's no doubt about that. Based on the law averages, it's the best jackpot slot to play at the moment.

Where to Play Mega Fortune Dreams?

It's true that Mega Fortune Dreams isn't as prevalent as some of the other jackpot slots, but it's still available at many of our favourite online casinos. Surprisingly, some of the sites which host pretty much every other NetEnt game don't offer Mega Fortune Dreams. It means you may have to look a bit harder, but you'll find it. Let us give you a helping hand.

Put simply, Casumo will always remain one of our very favourite online casinos. Its quirky theme allows you to unlock various parts of the Casumo planet while completing rewards and winning cash. It also has a decent record for creating millionaire jackpot winners recently, perhaps owing to its popularity. You can play Mega Fortune Dreams here, but don't forget to pick up your welcome bonus featuring 20 no deposit free spins, plus a 100% cash bonus and 180 more free spins with your first deposit.

Press release distributed by Pressat on behalf of 777 Casino, on Tuesday 27 June, 2017. For more information subscribe and follow https://pressat.co.uk/ 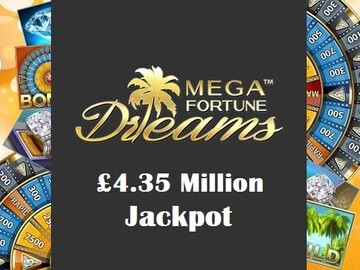 Is £4.28 Million Mega Fortune Dreams Jackpot Due to Drop?