Charlie, 16 months old, was born with a severe arachnoid cyst – so large that it took up two thirds of the left side of his skull.

The dad of a little boy who underwent major brain surgery at just eight months old is lacing up his trainers to raise money for The Sick Children’s Trust by taking on this year’s Great North Run.

31 year old Josh Yorke, from Houghton-le-Spring, is determined to raise £1,000 by completing the iconic North East half marathon to thank The Sick Children’s Trust for giving him and his wife, Courtni, a place to stay at its ‘Home from Home’ Crawford House.

The couple’s son, Charlie, 16 months old, was born with a severe arachnoid cyst – so large that it took up two thirds of the left side of his skull. As a result, it was compressing the left side of his brain into one third of his skull, increasing possibilities of damage to the brain. In November 2020, Charlie underwent brain surgery lasting 3-4 hours at Newcastle’s Royal Victoria Infirmary (RVI) where a stent was fitted to help drain the cyst fluid. While Charlie underwent the surgery and recovered in the Paediatric Intensive Care Unit, the family was offered a place to stay by The Sick Children’s Trust, which runs Crawford House. The couple were given a bedroom in the ‘Home from Home’ which is located just a few minutes’ walk from the children’s wards at the RVI. Josh said:

“The situation would have been tough in normal circumstances, however happening during a global pandemic made it all the more difficult. As a result of COVID restrictions only one of us could be at Charlie’s side before and after the operation, which meant the other would have needed to go home. Fortunately for us though, the Great North Children’s hospital were able to contact Crawford House and arrange a room for us to stay and use as we felt necessary for four days, meaning neither of us had to go home. We could also both spend time with our son, and alternate throughout the day and night to be by his side.

“Having a place to stay at Crawford House gave us lots of comfort knowing we were only ever five minutes away from Charlie. It also gave the two of us a chance to gain some respite as and when it was needed.

“I’d say I’m a typical man and generally hold my emotions close to my chest, its never easy to show how you’re truly feeling. For me, Crawford House gave us the space and privacy needed to deal with our emotions.”

The Great North Run takes place on Sunday 12 September 2021. Not only will Josh be aiming to complete this 13.1 mile challenge, but it is likely that Charlie will be undergoing further surgery at this time. Josh continued:

“It’s impossible to explain just how much of an emotional rollercoaster it is when your child is unwell and needs to be in hospital. Everything can seem fine one minute, and then the next it’s not.

“I’ve wanted to do the Great North Run for a long time, but only for a charity which I’ve had experience of and believe in. The support that The Sick Children’s Trust gave me and my wife last November was incredible – it gave us a home closer to our son. I want to do something to say thank you for being there for us, and all the other families, through such a traumatic time.”

This year, Crawford House is celebrating 25 years of keeping families together by their child’s hospital bedside. Opened in 1996, The Sick Children’s Trust ‘Home from Home’ has supported over 12,000 families, like Josh’s, giving them a place to stay and one less thing to worry about when their child is in hospital. It costs the charity £30 to support a family for one night, and over the years it is thanks to people like Josh, who take on fundraising challenges, that Crawford House has become a ‘Home from Home’ to thousands of families. Alexia Addis, Regional Fundraising Officer, said:

“For Josh and many other families Crawford House is a place which gives them some relief during a very uncertain time. Crawford House, like all our ‘Homes from Home’, offer families somewhere warm and comfortable which they can return to after a busy day on the wards, whilst only ever being a stone’s throw away from their loved one.”

“We’d like to say a huge thank you to Josh for choosing to take on the Great North Run for us this year. Everyone at The Sick Children’s Trust knows he will confidently make his way around the course, and we are looking forward to cheering him on.”

In addition to the Great North Run, Josh and 12 friends cycled the Coast to Coast earlier this year. So far he has raised £613 of his £1,000 target. To support Josh’s fundraising efforts, visit: https://www.justgiving.com/fundraising/josh-yorke

Press release distributed by Pressat on behalf of The Sick Children's Trust, on Tuesday 17 August, 2021. For more information subscribe and follow https://pressat.co.uk/ 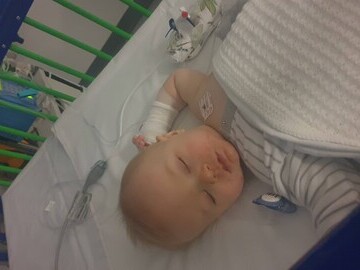 Charlie pictured with his parents Josh and Courtni 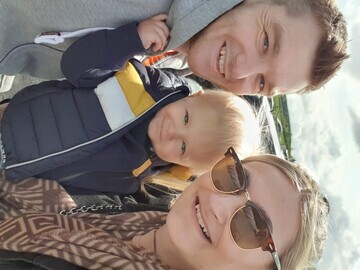