The My Name’5 Doddie Foundation is delighted to announce that Raging Bull Sportswear has been appointed as the charity’s new official licensed sportswear partner for 2018 and has launched a new sportswear range of clothing carrying his new tartan.

The My Name’5 Doddie Foundation is dedicated to raising funds to aid research into the causes of Motor Neurone Disease and investigate potential cures. The Foundation is also looking to establish grants for individuals suffering from MND, to enable them to live as fulfilled a life as possible.

Last month Doddie'5 personal tartan was launched in concert with The Scotland Shop, designed specifically to support the My Name'5 Doddie Foundation, where a percentage of sales of the cloth go to the charity. The blue and white within the tartan represent the colours of Scotland, and the black and yellow are the colours of Doddie's Borders club, Melrose RFC.

Building on the great looking new tartan Raging Bull Sportswear approached Doddie and suggested that a niche sporty clothing range be designed featuring this bright tartan look. “I first met Doddie at Penrith RUFC where he helped out as guest coach and spoke at our dinner. Doddie made a lasting impression, which is why we all want to help where we can. Working with him on the design of the tee, hoodie and classic collar rugby shirt, our designers achieved a faithful match of the tartan. It was a challenge but one we relished, and the final garments look impressive,” said Nigel Beaty, sales manager (North & Scotland) at Raging Bull Sportswear.

Raging Bull lifestyle and sportswear clothing company founder and World Cup winner Phil Vickery, MBE DL added: “What an honour to support Doddie with his own branded sportswear range. Since Doddie told us his news last year the backing from the rugby community has been huge and I am thrilled to support him personally, as well as through my business. It shows our versatility as a manufacturer to create garments, especially on the hoody! I am proud to see my Bull brand alongside Doddie’s name and wish the Foundation well in its cause.”

Said Doddie Weir: “My Name’5 Doddie Foundation is looking forward to working with Raging Bull and I know everyone will love the new clothing – a great way to show your support for the charity. We are now firmly focused on what we can do to help fund research and hopefully, one day, find a cure for MND. We also want to support fellow sufferers and push the need for research further up the agenda.”

The clothing is available to order online Doddie Weir Foundation Sportswear Range
Pricing for the tee shirt starts at £15; £42 for the classic rugby shirt and £32 for the hoodie. The range is available in unisex sizes 3XSB through 6XL and all profit is donated to the Foundation.

Doddie Weir is one of rugby’s most recognizable personalities. He earned 61 caps for Scotland during a successful playing career, represented the British and Irish Lions on their successful tour to South Africa in 1997, and won championships with his two club sides, Melrose and Newcastle Falcons. A talented, committed and athletic lock forward, Doddie is now facing his biggest challenge.

In June 2017 the Scot revealed he was suffering from Motor Neurone Disease. From the outset, Doddie has been driven to help fellow sufferers and seek ways to further research into this, as yet, incurable disease. In November 2017 Doddie and his Trustees launched the registered charity My Name’5 Doddie Foundation.

Rugby Sportswear and Clothing was established by rugby legend Phil Vickery - the Raging Bull. Raging Bull Clothing Limited is the lifestyle brand that sells a wide range of leisurewear including t-shirts, polo shirts, jackets, trousers and jerseys. Raging Bull Sportswear, in collaboration with Halbro Sportswear, is the established sports clothing division with its roots in rugby, union and league, as well as all other core sports and provides branded, bespoke team wear to clubs, schools, colleges and universities.

Press release distributed by Pressat on behalf of Pentacom PR, on Wednesday 21 March, 2018. For more information subscribe and follow https://pressat.co.uk/ 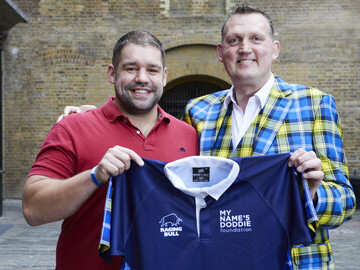 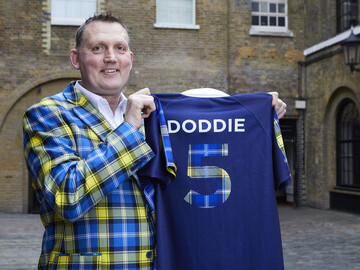