HER MAJESTY THE QUEEN HAS OFFICIALLY RECOGNISED CRABS AND LOBSTERS AS SENTIENT ANIMALS IN BRITISH LAW!

A monumental step for animal welfare was taken today (28 April 2022) in the UK as Her Majesty Queen Elizabeth II granted Royal Assent to the Animal Welfare (Sentience) Act. The passing of this Act is a historic moment for animal welfare as it marks the first-time animals like crabs, lobsters and prawns (decapod crustaceans) are protected in British law.

“The Sentience Act passing into UK law is wonderful news for decapod crustaceans like crabs and lobsters. The scientific and legal recognition that they are sentient and can feel pain means it is without question that decapods should now also be protected in the real world. Everyday crabs, lobsters and other decapods are treated in ways that would simply be unthinkable for other animals including being boiled alive. Crustacean Compassion look forward to continuing to work with governments and industry to translate the important words within this Act into actions that protect these animals from suffering.”

The Sentience Act was drafted in 2021 to replace some EU animal welfare legislation post-Brexit. It plays a crucial role in recognising that animals are capable of feeling pain and need protection in law.

Although at first the Act only covered vertebrates, in November 2021 it was amended to include decapods. This was following a government commissioned review of over 300 scientific studies assessing the sentience of these animals. Carried out by an expert team at the London School of Economics and Politics (LSE) and led by Dr Jonathan Birch, the peer-reviewed, independent report concluded that there is strong scientific evidence of sentience in decapod crustaceans and cephalopod molluscs, and that they should be included in animal protection legislation.

As a nation that prides itself on being a leader in animal welfare, this was welcomed by the British public, politicians, and those working in the seafood industry who seek clearer guidance on how to handle these animals and protect their welfare. The UK’s leading organisation campaigning for the better treatment of decapods, Crustacean Compassion, highlighted the widespread support in the form of a petition signed by over 60,000 people, and an open letter signed by scientists, veterinary organisations and public figures, including the British Veterinary Association, RSCPA and animal welfare experts Dr Jennifer Mather and Dr Marc Bekoff.

Dr Jennifer Mather, University Professor in Psychology from the University of Lethbridge, Canada and expert on invertebrate animal welfare said: “It is good to see such progress, let’s hope it spreads to other countries.”

Press release distributed by Pressat on behalf of Crustacean Compassion, on Thursday 28 April, 2022. For more information subscribe and follow https://pressat.co.uk/ 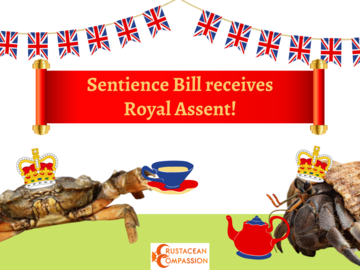