MANILA, Philippines, June 9, 2020  - The Coalition of Asia Pacific Tobacco Harm Reduction Advocates (CAPHRA) and global health experts have dismissed as "​naïve" and "harmful" a report published by a regional lobby group about the so-called youth epidemic in a bid to undermine scientific evidence in favor of reduced-risk products.

Nancy Loucas, Executive Director of CAPHRA, described the report entitled "Today's Teens, Tomorrow's Customers" as a product of perception by a group that is funded by industry, including pharmaceutical interests that "justifies its existence by creating a youth 'epidemic' in order to remain relevant."

Loucas said the report published by Southeast Asia Tobacco Control Alliance (SEATCA) for World No Tobacco Day could no longer deny the truth about the effectiveness of tobacco harm reduction and reduced-risk products such as e-cigarettes, heat-not-burn tobacco products and snus in making smokers switch. The report argued that "banning the manufacture, importation, promotion, distribution, sale and use of these products is still the most comprehensive approach" to regulating e-cigarettes and heat-not-burn tobacco products.

Loucas said SEATCA's argument that "e-cigarettes and heated tobacco products are being used to entice youth to take up vaping and potentially smoking" is the opposite of what happens in different countries when smoking rates are on the decline.

She said that even the World Health Organization (WHO), after months of demonizing tobacco harm reduction and reduced-risk products, has recently come out with a theme report on World Vape Day stating that, "while it is expected that use of EN & NNDS [electronic nicotine and non-nicotine delivery systems] in these groups might increase their health risks, non-pregnant adult smokers who completely and promptly switch from combustible tobacco cigarettes to use of unadulterated and appropriately regulated EN & NNDS alone might reduce their health risks."

"The most interesting point in the WHO theme report is that WHO also expended a lot of space on the scientific knowledge of e-cigarettes, with a view to the public having more knowledge about e-cigarettes. The very same public knowledge held by the consumers of CAPHRA's member organizations, who are shut out of any discussion around tobacco control and harm reduction with their own governments," Loucas said.

David Sweanor, a Canadian lawyer who has worked in global public health efforts on tobacco for over 30 years, said the SEATCA report "shows extraordinary levels of naivety about consumers, nicotine, the tobacco industry and the history of successful efforts to reduce risks for a vast array of other products and services."

Sweanor said the report diminishes "an unparalleled opportunity to save millions of lives and to relegate cigarettes to the ashtray of history."

"Inhaling cigarette smoke is extraordinarily toxic, resulting in over 20,000 global deaths daily. We have known for decades that the harm is from the smoke, not the nicotine, and we now have viable ways to give the nicotine people need or want without the inhalation of the toxic products of combustion.

"To see this situation as a reason to protect cigarettes by banning safer alternatives rather than using these safer products to attack the cigarette business is breathtakingly ignorant. It would be like dealing with a cholera epidemic by seeking to ban clean water or dealing with automobiles by banning safety features," he said.

"I am shocked by just how counterproductive a paper they have produced. One might think novices in the field would seek advice from people like me. In this case, they not only failed to do that but defamed me. They clearly have an agenda, and it is advantaging the cigarette business rather than public health," said Sweanor.

"At a very basic ethical level, they should prominently disclose their funding sources. When people purporting to be health advocates take positions so oppositional to public health, the public and regulators have a right to know of vested interests," he said.

Konstantinos Farsalinos, a cardiologist, senior researcher at the University of Patras in Greece and Highly Cited expert on tobacco harm reduction, said, "the SEACTA position to ban harm reduction nicotine products is an unfortunate display of unrealism and failure to understand and present the totality of evidence."

"This is one of the many Bloomberg-funded organizations whose campaigns are actually protecting tobacco cigarette sales and profits since their proposals will result in the creation of a monopoly for tobacco cigarettes—the most harmful and deadliest nicotine product," Farsalinos said.

"Banning the substantially less harmful, non-combustible nicotine products while allowing the sales of tobacco cigarettes is ironic, unreasonable, harmful for public health and a direct violation of human rights and of the 1986 WHO Ottawa Charter for Health Promotion," he said.

Professor Tikki Pangestu, a visiting professor at Lee Kuan Yew School of Public Policy in the National University of Singapore, said that by conflating the benefits for smokers who want to quit, with as yet unproven allegations of risks to youth, the report does a disservice to smokers and is an abuse of the human right to access better health.

"A more open and objective mind to the evidence, and a willingness to try out THR in addition to traditional strategies such as NRTs and cessation services, could go a long way to saving the lives of more than 1 billion smokers globally, most of whom live in LMICs [low and middle-income countries] of the developing world," Pangestu said.

"Most of the worldwide 1 billion smoking-related deaths for the remainder of this century will also be in LMICs. The fact that LMICs are where most of the tobacco-related harm is now and even more so, is going to be in the future, are very good reasons to make advocacy in LMICs for THR the highest priority," Wodak said.

"LMICs have younger populations and higher smoking rates than rich countries. These are all the more good reasons for making THR advocacy in LMICs a top priority," he said.

The Coalition of Asia Pacific Tobacco Harm Reduction Advocates (CAPHRA) is an alliance of consumer organizations from Australia, Hong Kong, India, Indonesia, Malaysia, New Zealand, the Philippines, South Korea, Taiwan and Thailand that aims to educate, advocate and represent the right of adult alternative nicotine consumers to access and use of products that reduce harm from tobacco use.

Press release distributed by Pressat on behalf of JFPRC, on Tuesday 9 June, 2020. For more information subscribe and follow https://pressat.co.uk/ 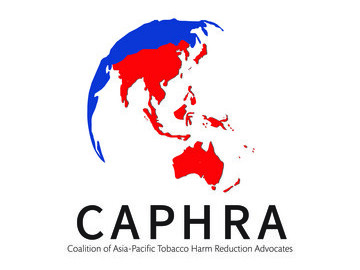