Vowley Racing, the only falcon racing venue in Europe, is delighted to announce an additional fixture to the 2021 racing calendar. Building on the success of previous seasons which drew competitors and spectators from around the world to the British Falcon Racing Finals, a novice event has been created to encourage the next generation of falconers to share in the thrill of the races. August 22nd will host the usual exciting classes, from the high-adrenaline Hunt Race to the flat course telwah, but with new classes for novice or junior categories.

Zoologist, falconer and creator of robotic prey for falcons, Dr Nick Fox OBE said, “Falconry is a heritage sport, but one that has been limited to a lucky few for generations. We want to let people share in the thrill, the excitement, the wonder of it all. And we want to pass it on in good heart to our children. So we created the Hunt Race, a format that tests and showcases every aspect of a falcon’s skills, and one that lets spectators share the excitement. The paradox is really that technology is bringing us closer to the natural world than ever before”.

Falcon racing against the clock has long been established in the Middle East. Prize money runs to millions and race-winning birds exchange hands for hundreds of thousands of dollars. But the format developed in the United Kingdom by Nick Fox and his team is new and focuses on the falcon and on developing her aerial mastery. Highly skilled pilots partner with the fastest animals on the planet to complete a high-speed, high-octane chase, high above the audience taking racing to another dimension.

Press release distributed by Pressat on behalf of Vowley Racing, on Friday 6 August, 2021. For more information subscribe and follow https://pressat.co.uk/ 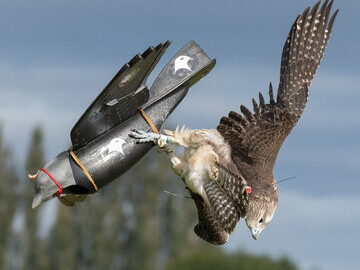