unique haul of personally signed shirts, including from all 92 clubs in the Premier League and Football League pyramid

Steve Dukes, Head of Kit and Equipment for Tottenham Hotspur Football Club is to auction a unique haul of personally signed shirts, including from all 92 clubs in the Premier League and Football League pyramid, in memory of his late father Charlie Dukes.

The online auction will begin on Friday 14th May, lasting for one week to coincide with the one-year anniversary of his father’s untimely death and will raise vital funds for the work of Essex & Herts Air Ambulance (EHAAT).

Signed shirts from the worlds of international football, rugby, Old Firm rivals Glasgow Rangers and Celtic and the National League will also be available to bid for in the auction.

On 18th May, 2020 Charlie (73) from Goffs Oak in Hertfordshire told his wife Jill that he was cycling to a nearby farm to pick up some sticks for use on his garden vegetable patch. It was a short ride and one that Charlie, an experienced cyclist, had made many times. Tragically it was a journey that Charlie did not complete.

A short while later a passer-by found Charlie at the side of a track, unconscious and with a serious injury to his head. An East of England Ambulance Service Trust (EEAST) team and a critical care team from EHAAT were quickly on the scene. The charity’s team prepared Charlie for the short flight to Royal London Hospital, a major trauma centre, where he could receive specialist care.

When Steve, his brother John and Jill arrived at the hospital doctors told them Charlie was on life-support. Sadly, despite the best efforts of the EHAAT team and the staff at the hospital, Charlie’s injuries were just too severe. He passed away five days later without regaining consciousness.

Despite the devastation of their loss, Steve says he and his family were relieved to know that everything that could have been done to help Charlie that day had been done thanks to the efforts of EEAST and EHAAT working together. Steve said, “We were comforted by the fact that because of the air ambulance dad got the best possible care at the scene, giving him the greatest chance of survival. I’d watched programmes about air ambulances in the past, but I didn’t realise they are charities. That’s why I want to do some fundraising, to say thank you.”

Steve has persuaded his many friends in the sporting world, including first team players from Tottenham Hotspur, to help him raise funds through promoting this very special online auction through their social media channels. Beginning on Friday 14th May the auction will close on Sunday 23rd May, the anniversary of Steve’s father’s passing. The auction of sporting shirts consists of 106 individual lots, each personally signed by players from the donating teams and includes contributions from:

To take part in the auction, fans and supporters can simply click here or visit www.grahambuddauctions.co.uk/signed-shirt-auction, to register and start bidding. If you don’t want to join the auction, but would still like to make a donation you can visit the Just Giving page that Steve has set up at www.justgiving.com/fundraising/steve-dukes.

Steve is determined to keep the memory of his father alive. Charlie was a devoted husband, father and grandfather, an active man who loved every aspect of life. He had an amazing smile that would brighten up any room.

Steve continues, “We were devastated by his death but we are so grateful for what EHAAT did for him and for the assistance the charity has given us since. In particular EHAAT’s Patient Liaison Managers have provided us with emotional support and we now have a better understanding of the injuries he sustained. They have answered the many questions we needed to ask, which has been a real comfort”.

“We want people to support EHAAT so that they can carry on providing this invaluable service for other families that need help. At the same time, we also want to raise awareness about the importance of wearing cycle helmets. This is my way of keeping the candle alight for my dad. I want to keep his memory strong by helping to raise funds. I’ve spoken to a lot of people in football, and between us I am confident we can raise a lot of money”.

EHAAT’s Fundraising Manager Natasha Robertson said: “Everyone at the charity has been deeply touched by Steve’s story. Sadly, our crews cannot save every patient they attend, but we are pleased to hear that Steve and his family have been reassured by the fact that Charlie got the best possible care at the scene of his accident”.

“We were amazed to hear about Steve’s plans for what promises to be a truly special fundraising auction. It will be an exciting week and we look forward to seeing the result. We hope that Steve and his family are comforted by the fact that the funds raised through his unique auction lots will help ensure our critical care teams can be there for other families when they need them most”.

For more information about EHAAT and its work, visit ehaat.org.

Photograph 2: Steve Dukes and some of the auction lots

Press release distributed by Pressat on behalf of Essex & Herts Air Ambulance, on Friday 14 May, 2021. For more information subscribe and follow https://pressat.co.uk/ 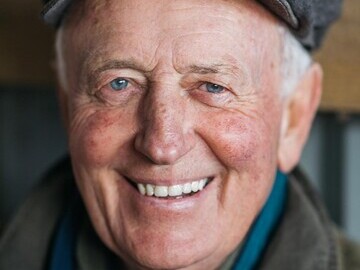 Steve Dukes and some of the auction lots 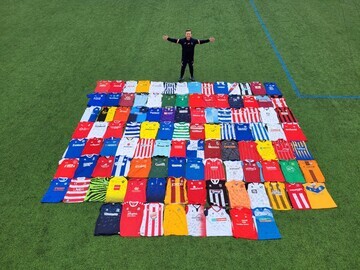 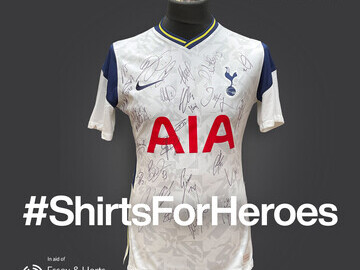 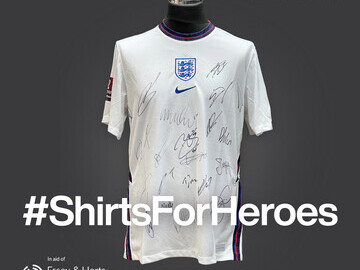