​Trust in business to behave ethically recovers (slightly), according to survey from the Institute of Business Ethics

The British public’s opinion of business behaviour appears to be improving, according to the latest survey conducted for the IBE

12th December 2017 : The British public’s opinion of business behaviour appears to be improving, according to the latest survey conducted for the Institute of Business Ethics.

The survey, published today, shows that the public’s general opinion about ethical business behaviour has improved. Over half (52%) now say they consider that business behaves ethically, a slight recovery from last year’s dip (48%), but not yet back up to 2015 levels (59%).

The strength of negative opinion is also decreasing, with fewer people now saying that business behaves “not at all ethically” (down from 9% in 2012 to 5% in 2017).

Since the survey began in 2003, the British public’s opinion has consistently leant more towards judging business as behaving ‘ethically’ than ‘not ethically’. However, last year, public opinion fell significantly, down 11 percentage points compared to 2015.

Philippa Foster Back CBE, IBE’s Director, said: “Although these results are encouraging, this may be related to the scandals which have affected other institutions in society over the course of 2017. By contrast, business appears more responsible in the eyes of the public. The fact that corporate tax avoidance and executive pay remain the top public concerns is an example where business is still not doing enough to address ethical issues.”

The top 3 issues that the public think business needs to address remain unchanged for a fourth consecutive year.

Tax avoidance has been one of the top two issues since it was first introduced in the survey in 2012, with 38% considering this an issue that needs to be addressed, down from 43% last year.

Philippa Foster Back CBE said: “Tax is a difficult and complex issue, but it isn’t going away. This year the Paradise and Panama Papers have thrown this issue even more into the spotlight. Companies need to do more to address public concern and communicate the circumstances behind the tax positions they decide to take”

Executive pay continues to be an issue, with 30% of the public thinking this still needs to be addressed (up from 28% last year).

Philippa Foster Back CBE commented: “Although there has been some movement on this issue by companies, as past shareholder approved policies take effect, it will still take time to move the dial. Naturally the public perception is that the changes are not quick enough.”

Exploitative labour* and work-home balance for employees also remain concerns, but Employees being able to speak up about wrong doing enters the top 5 with 17% raising this as an issue of concern.

Philippa Foster Back CBE said: “Although we are seeing a rise in the number of companies providing channels for employees to raise concerns, companies still need to listen to what they are saying. If employees repeatedly speak up and don’t feel heard, they might stop talking. And that silence can be dangerous.”

To obtain jpegs of the infographic, or to organise interviews or articles, please contact Katherine Bradshaw, Head of Communications 07771 517700 k.bradshaw@ibe.org.uk

Since 2003, the Institute of Business Ethics has commissioned Ipsos MORI to carry out an annual survey asking British adults their opinion on the ethical behaviour of British business and the issues that most need addressing.

The two questions asked are:

Q1: How ethically do you think British business generally behaves?

Q2: In your view of company behaviour, which two or three of these issues most need addressing?

*In 2014 ‘Sweatshop labour’ was changed to ‘Exploitative labour’.

The research is conducted on behalf of the IBE by Ipsos MORI. This year, 2,003 GB adults aged 18+ completed an online survey between 08-15 September 2017. Data has been weighted to reflect the adult population (18-65) in the UK in terms of age, gender, region, class, ethnicity, housing tenure and occupational status.

Change in methodology. In 2016 the study moved from face-to-face interviewing to online surveying. It is acknowledged that studies suggest online surveys elicit more ‘don’t know’ responses compared to face-to-face surveys, as respondents are considered to be more comfortable in saying that they are unsure about something when not responding face-to-face.

About the Institute of Business Ethics

Press release distributed by Pressat on behalf of Institute of Business Ethics, on Tuesday 12 December, 2017. For more information subscribe and follow https://pressat.co.uk/ 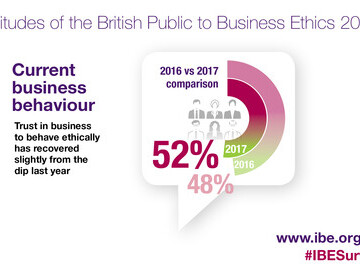 Issues which the public think business needs to address 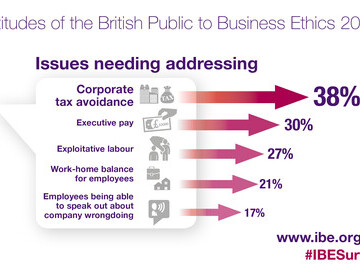 Percentage of those who think business behaves ethically/unethically 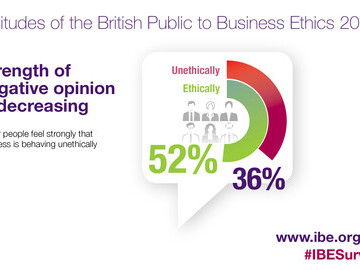 ​Trust in business to behave ethically recovers (slightly), according to survey from the Institute of Business Ethics