Rescue squirrels in London get ready for Christmas

Walking through the London Parks at this time of the year, you are bound to see grey squirrels collecting and burying nuts and acorns in preparation for the cold winter months ahead, but foraging on the ground makes them more vulnerable to being injured by dogs.

Urban Squirrels is a London-based licensed squirrel rescue which takes in and cares for orphaned and injured squirrels, although by law it is not allowed to release them back into the wild.

“I started this organisation six years ago,” explains founder, Natalia Doran, “I discovered that grey squirrels are classified as alien species which means that a vet would have to euthanize them if no rescue placement was available after treatment, if they were bought into a practice. I believe that every life is precious and that every animal deserves a chance, regardless of its species, so that is why I set up the Urban Squirrels organisation.”

Urban Squirrels is part of One Voice for Animals UK, which brings together almost 300 animal organisations into one directory to provide a quick and easy resource for the public to find a rescue centre near them.

One of the busiest times for Natalia begins in February when the baby squirrels are born. “People will contact me to say that they have found a baby squirrel and they do not know what to do, but it’s always best to wait and see if the mother returns,” explains Natalia.

If they do get rescued, Natalia has the job of hand rearing them which can be tough with night feeds but also very rewarding. “I remember once a few years ago a lady bought me a rescued baby squirrel in a box with a note from the lady’s little daughter begging me to take care of Chestnut!”

One of Natalia’s favourite rescue squirrels is Cledward who will be having his second Christmas at the Urban Squirrels. Cledward was bought in with severe leg injuries after having been caught in a trap. “We had to have his leg amputated, but it does not seem to bother him. He is very active and loves the festive Christmas tree we have put in his enclosure,” says Natalia.

States Val Green, Founder of One Voice for Animals UK, “Squirrels are very intelligent little animals, as anyone who watched them for any length of time would know. During this pandemic, I believe they have also greatly helped with people’s mental health. We are proud to support Urban Squirrels and to recommend the One Voice for Animals UK directory (helpanimals.co.uk) to the public as the place to go to find and support their local rescue centres”.

We are a wildlife rescue unit based in London UK, specialising in grey squirrel rescue and advocacy. For more information visit www.urbansquirrels.co.uk

The One Voice for Animals UK

Launched in April to support wildlife and domestic animal rescue centres and sanctuaries struggling due to the Covid crisis, The One Voice for Animals UK brings together almost 300 animal organisations, caring for approx 22,000 animals between them into one searchable directory www.helpanimals.co.uk where the animal loving public can find and support rescues near them. The group also offers opportunities for the public to get involved in knitting nests for baby birds; become a volunteer wildlife transport driver, buy and sell to support their local rescue and take part in fundraising Auctions. These can all be reached from the Communities page on the One Voice for Animals website www.helpanimals.co.uk

Press release distributed by Pressat on behalf of One Voice for Animals UK, on Wednesday 9 December, 2020. For more information subscribe and follow https://pressat.co.uk/

Cledward getting ready for Christmas 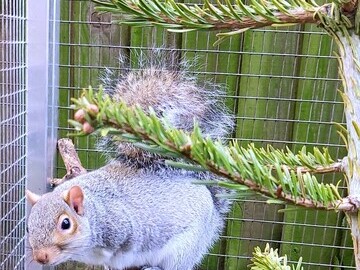 Rescue squirrels in London get ready for Christmas