News provided by The Forum on Monday 9th Mar 2020

The Forum, Norwich has announced that the Norwich Games Festival will return on Monday 25 May - Saturday 30 May 2020 and revealed Knightmare Live as a headline event.

Knightmare Live is the critically acclaimed stage adaptation of the cult Anglia TV classic Knightmare which ran from 1987-1994. Audiences have the chance to don the iconic Helmet of Justice and brave Lord Fear’s evil lair. You can also bring quest items to use in the show, the weirder the better. Expect magic, mayhem, monsters and…anagrams. Earlybird tickets are now on sale.

Organised and run by The Forum, Norwich Games Festival celebrates the cultural, creative and educational aspects of the gaming industry. It’s for all ages, all levels of interest and expertise, and a great opportunity for local, national and international talent to showcase their expertise in game development and programming.

Other highlights include a pop-up board game café by Zatu Games, the Norwich Games Festival Pub Quiz hosted by Stuart Ashen (aka Ashens) and Did You Know Gaming, and Norwich Retro Gamers showcasing their impressive collection of vintage consoles in the Retro Arcade.

The heart of the festival is the Indie Zone for independent developers. Games already confirmed are Wibbly Witches created by Owen Senior a young developer from Norwich and Lost for Words, developed by East Anglian based Sketchbook Games.

Spaces are available for anyone who’d like to showcase their latest game or project for free as part of the festival. Commenting Festival Producer Dan Scales said: “If you’ve been working on something cool that you would like to show at the Festival we’d love to hear from you! It’s an amazing experience to test your game, get feedback and have thousands of people play your creation.”

The full festival programme will be announced in April and include a mix of indie, mainstream and retro games, seminars, talks, workshops, demos and shows.

Press release distributed by Pressat on behalf of The Forum , on Monday 9 March, 2020. For more information subscribe and follow https://pressat.co.uk/ 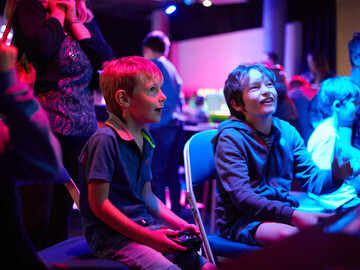 * For more information regarding media usage, ownership and rights please contact The Forum .