NORTHAMPTON IS MY FATE

Part of the offsite project Filaments from the Dandelion Clock.

NORTHAMPTON IS MY FATE is a newly commissioned site-specific work by emerging British artist Sayed Sattar Hasan. The artist has appropriated an advertising billboard on Cotton End, a major arterial road into Northampton. The eponymous phrase was first used by Hasan in a piece created for the exhibition Third Space at NN earlier this year. Since then NN have continued to work with him to develop this new artwork, which will feature on the billboard from 6–18 October 2015.

The huge photographic image could be interpreted as a proud celebration or a self- effacing swipe at Northampton, reflecting the sardonic humour of the town. Hasan's interest in home, belonging and circumstance reflects a contemplative approach to looking at relationships with the places we find ourselves, in the unpredictable journey of life. The piece may be seen as an unexpected anomaly in the urban landscape for passers-by to encounter and make sense of on their own terms.

The concept will be further brought to public attention through the distribution of NORTHAMPTON IS MY FATE badges and postcards at Northampton train station intermittently between 7–10 October 2015. In exporting the slogan beyond the boundary of the town, the ephemeral objects have the potential to become honorary distinctions associating a person to Northampton, or cryptic messages for curious travellers to discover and disseminate further.

The artist constructed the slogan using rubble collected from the demolition site of the Greyfriars bus station in Northampton. Before its demise (March 2015), the Brutalist structure nicknamed 'the mouth of hell' was regarded as one of the 'ugliest' buildings in Britain, but for many people it was simply misunderstood, much like the town itself. In its new incarnation the debris forms part of a work exploring both the physical and emotional regeneration of people and places.

Hasan says, "Home towns can feel like starting places where futures are imagined elsewhere, but who's to know where you end up. In a world of turmoil where people risk their lives to journey somewhere better, and global cities that financially cripple people trying to live in them, Northampton, isn't that bad.

After recently moving back here, I started to view my relationship with it (Northampton) in a different way. Wherever I dream of being, Northampton is part of a constellation of places, people and things that has a bearing on my life. These connections are important to me, so I use my artistic practice to explain why."

NORTHAMPTON IS MY FATE is one of the offsite projects investigating ideas of movement called Filaments of the Dandelion Clock taking place across Northampton summer–winter 2015. Other Filaments artists participating include Tessa Farmer, Liz Ballard, SeeNN and Nicola Conibere. It is part of NN's Ways to think about diaspora season.

NN is a contemporary art space in the centre of Northampton, UK.

You can read more about the Third Space exhibition in NN's online archives: www.NNContemporaryArt.org/exhibitions/third-space

You can read about the first offsite project from Filaments From the Dandelion Clock called Do-Re-Me by Nicola Conibere at the following page: www.NNContemporaryArt.org/exhibitions/nicola-conibere 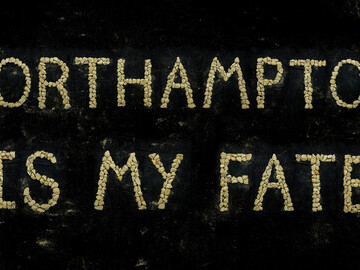 NORTHAMPTON IS MY FATE