Matt Allwright beats The Chaser and donates £17,000 to Sands

Matt took part in the popular show where celebrity contestants aim to raise as much as they can for their chosen charities by answering general knowledge questions against a quiz mastermind known as ‘The Chaser.’ It’s the job of The Chaser to stop contestants winning as much cash as possible.

Matt's general knowledge skills were put to the test but he kept his nerve and beat The Chaser. He donated £17,836.50 to Sands the stillbirth & neonatal death charity, that will enable them to continue with their vital research work to reduce the number of baby deaths in the UK. Matt became a Sands ambassador after the death of his best friends' twin boys.

Matt Allwright said: “I’m so happy that I was able to compete for Sands on The Chase. It’s a charity that means a lot to us as a family and I know the money will be put to good use. Sands help parents in their darkest hours, and the research they do can make a huge difference. Quite apart from that, it was also brilliant fun to finally pit my wits against a chaser!"

Dr Clea Harmer, Chief Executive of Sands, said: “We’re delighted that one of our Ambassadors, Matt Allwright, took part in The Chase. We cannot thank Matt enough – we really appreciate him taking on The Chaser with Sands as his chosen charity.

“We depend almost entirely on the generosity of our supporters so that we can work to reduce the number of babies dying, help bereaved parents and their families, and work with health professionals to improve bereavement care.”

Sands supports anyone who has been affected by the death of a baby before, during or shortly after birth. The charity offers emotional support and information for parents, grandparents, siblings, children, families and friends, health professionals and others.

Matt and his celebrity team of Stacey Solomon, Louise Minchin and Keith Allen all played their part in beating The Chaser and donated their share of the prize fund to their chosen charities.

To watch the programme again in full visit: http://www.itv.com/hub/the-chase-celebrity-specials/2a1400a0068

Picture: Matt Allwright on The Chase.

Matt Allwright first came to prominence in 1997 as an investigative journalist on the flagship BBC consumer affairs programme Watchdog. Since 2001 he's been the iconic presenter of the highly successful programme Rogue Traders, plus starring in Just the Two of Us.

Sands is the leading stillbirth and neonatal death charity in the UK. They work nationally to reduce baby deaths through promoting better maternity care and funding research. They have a programme of training and a wide range of resources designed to support professionals to improve the bereavement care they provide following the death of a baby, and they provide a comprehensive bereavement support service both nationally through their helpline and locally through around 100 regional support groups based across the UK. Further information can be found at www.uk-sands.org.

Press release distributed by Pressat on behalf of Sands , on Monday 31 October, 2016. For more information subscribe and follow https://pressat.co.uk/ 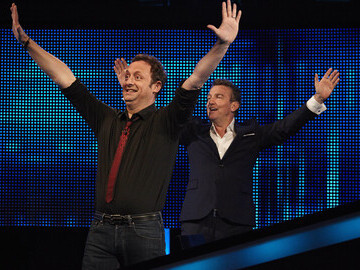 Matt Allwright beats The Chaser and donates £17,000 to Sands