“It’s great to hear that the work we are doing to keep the meadows right for breeding waders is working," Will Mitchell, farmer

An Avon Valley farmer and Game & Wildlife Conservation Trust (GWCT) ecologist are celebrating the return, for the fifth year in a row, of a female lapwing to the farm where she originally hatched. The lapwing hatched in a field on Will Mitchell’s farm alongside the River Avon on the Hampshire-Dorset border in 2016. Since then, she has faithfully returned each spring from her winter feeding grounds.

Lapwings are iconic but rapidly declining farmland birds, whose numbers have fallen by 50% since 1983. The species is now ‘red-listed’ as a bird of conservation concern. There is little information on their movements outside of the breeding season but colour ringing and tagging studies are allowing us to better understand where they go. Lizzie Grayshon, wetlands ecologist with the New Forest-based GWCT, who monitors wading birds in the Avon Valley between Salisbury and Christchurch, said:

“We are excited and relieved to see this female return safely to the same corner of the farm near Christchurch for the fifth year. Lapwings are often ‘site faithful’ - coming back to the same places to nest and breed each spring - but it is highly unusual to be able to pinpoint the same bird for five consecutive years. Not only that, but she has now successfully raised several broods of chicks of her own on the farm.”

GWCT scientists have been monitoring waders in the Avon Valley since the mid-1990s. In 2015, after noticing alarming declines in numbers, they began working with 40 of the valley’s farmers, land managers and gamekeepers on the LIFE Waders for Real project, to carry out conservation work. The project succeeded in reversing the decline, seeing lapwing numbers rise from 61 pairs in 2015 to 105 pairs by the end of the project in 2019, and breeding success reaching sustainable levels.

Since then, Lizzie has continued to monitor wader populations and advise land managers, including Will, whose farm is home to this female lapwing.

“We are really pleased to hear that this lapwing keeps coming back to the farm and is successfully rearing chicks of her own,” said Will. “It’s great to hear that the work we are doing to keep the meadows right for breeding waders is working. We especially enjoyed joining Lizzie when she caught and tagged the bird. Seeing a lapwing up close was a fantastic experience. Nice to know we are doing our bit for the environment.”

GWCT ecologists were able to identify this female after fitting her with a colour ring as a chick in 2016. She was sighted in the same field on Will’s farm in 2017, 2018 and 2019. In 2017 her first breeding attempt failed when her nest was predated. Although she was spotted there again in 2018, 2019 was her first recorded successful breeding attempt. She nested just metres from where she was born and went on to fledge four chicks of her own.

Covid prevented fieldwork in 2020, but Lizzie returned to the farm in Spring 2021. The very first nest she came across belonged to the same lapwing female, who once again succeeded in raising and fledging chicks in the same field. Lizzie and her team were able to colour-ring the chicks, allowing them to also keep track of the growing dynasty. At the same time, they fitted the female with a tiny GSM tag weighing just 4g. When she returned to the Avon Valley this Spring, the scientists were able to download data from the tag using a remote base station, meaning the bird did not need to be recaught.

The lapwing’s tag showed she had spent the winter around Stanpit Marsh Local Nature Reserve near Christchurch, Milford-on-Sea, Keyhaven Marshes and Lymington, and the North Solent National Nature Reserve on the Beaulieu River estuary.

“Using tags allows us to learn more about the birds’ behaviour, habitat use and threats that they may face in the different locations,” explained Lizzie. “We carry out conservation in their breeding grounds, which has boosted the population and greatly improved breeding success in the Avon Valley, but they are only here in Spring. Learning more about where they go and what they get up to helps us to design conservation efforts to protect and support them throughout the year.”

This spring the lapwing chose to nest in a field adjacent to the one where she hatched and previously nested.

“The habitat had been improved by being grazed by ponies over the winter,” said Lizzie, “reducing vegetation height and creating divots, which lapwing like to build their nests in.”

Learn more about the waders of the Avon Valley, and the GWCT’s other conservation work, at the GWCT stand at the New Forest Show, between 26 – 28 July.

Colour ringing involves fitting a unique combination of coloured rings to a bird’s leg. This enables identification of an individual bird in the field, without the need to recapture the bird to read the metal ring number. Ringing of all kinds is only performed under strict license and colour-ringing projects must obtain approval from a central co-ordinator that considers both bird welfare and the viability of the study. 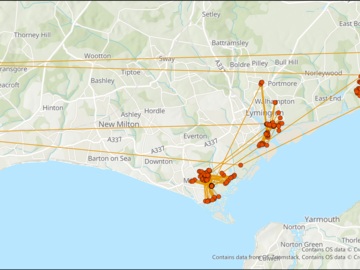 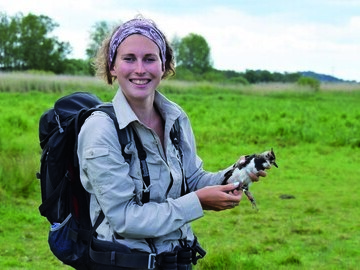