Innovative app launched to support bereaved parents, families and professionals in the UK

The mobile app is aimed at bereaved parents, their family and friends, partners and grandparents, so they can access information at their convenience

Sands (the stillbirth and neonatal death charity) is always looking to improve and expand on the different ways it offers bereavement support and advice to anyone affected by the death of a baby, for as long as they need it.

Today the charity is leading the way by launching a new bereavement support app, which it believes is the first of its kind, to enable bereaved parents and professionals to have information and resources at their fingertips.

The mobile app is aimed at bereaved parents, their family and friends, partners and grandparents, so they can access information at their convenience on their smartphone. It can also be used by healthcare professionals, employers and anyone who would like to know how best to support bereaved parents.

The app includes information and support resources about making difficult decisions, saying goodbye to your baby, returning to work, sexual relationships after the death of a baby, thinking about possible future pregnancy, supporting other children, organising a funeral for a baby and post-mortems.

The app contains links to the Sands website with details of local support groups across the UK, ways to share your story, Sands bereavement care resources for professionals as well as details of our work in research and prevention.

The idea to create an app was inspired by Nicole Regan-White, a bereaved mother, whose baby Jessica was stillborn after 42 weeks gestation on 24 December 2013.

Nicole Regan-White, said: “When Jessica died I was devastated and the midwife at the hospital didn’t know what to say to me. At the time I was given a 13 booklets, one which was 67 pages long. I could barely read five words, let alone read and digest such a long publication. When I did read it I discovered some of the content was not relevant to us, or it was too late for us to use, and was just too much to take in.

“Shortly after we lost Jessica I contacted Sands to let them know that searching for information was difficult and overwhelming for bereaved parents at the time of a baby’s death. In a digital age we discussed my idea of creating an app that can be downloaded in seconds that provides all the information a bereaved parent and their family would need anytime, anywhere.

“I previously worked for a global business and technology consultancy and submitted my idea to them as one of 20 global project submissions to utilise our key skills. I was so happy and humbled that my idea was chosen, developed out of a personal need and finally granted. I can’t wait to launch the app with Sands - that will be an aid to current bereavement care in the UK.”

The app ensures that everyone affected by the death of a baby has all of the information they need at their fingertips, when they are given the devastating news that their baby has died. It was made available to Sands’ support groups and volunteers at a special preview during Sands Awareness Month in June in order to gain valuable feedback.

Dr Clea Harmer, Chief Executive at Sands, said: “We are delighted to be able to launch the first mobile app for bereaved parents and families. We’d like to say a big thank you to Nicole Regan-White for her years of tireless work and coming up with the idea which was inspired by her baby daughter Jessica.

Jen Coates, Director of Volunteering & Bereavement Support at Sands, said: “We’d like to say an enormous thank you to Nicole-Regan White for her idea of creating an app, which is such a positive way of connecting bereaved parents and their families with the information they need at such a devastating time in their lives.

“We received many pieces of positive feedback when we tested the app with volunteers at our bereavement support groups earlier this year which was encouraging and we will continue to develop this resource.

“I also hope the app will be a useful resource for healthcare professionals, and that they will signpost parents who need help and advice to the app in future.”

To download the free app, visit the App store on any Apple device or visit the Google Play app store on Android.

Bereaved parents and their families can also call Sands’ Freephone helpline on 0808 164 3332 or email: helpline@sands.org.uk

Videos of Nicole Regan-White being interviewed on her baby daughter Jessica, and how she came up with the idea of an app are available upon request.

Nicole is not available for interview over the phone or in person, but is available to answer any questions from media by email.

Sands is the leading stillbirth and neonatal death charity in the UK. Sands exists to support anyone affected by the death of a baby, before, during or shortly after birth. The charity provides bereavement support services both nationally through its Freephone helpline, mobile app, online community and locally through a network of around 100 regional support groups based across the UK.

Sands works in partnership with health professionals, trusts and health boards and offers a range of training programmes and bereavement care resources to ensure that every bereaved parent and family receives the best possible care wherever they are in the UK.

Sands promotes and funds research to better understand the causes of baby deaths. Sands works with governments in Scotland, Wales, Northern Ireland and England, as well as key influencers and other organisations, to create a world where fewer babies die. www.sands.org.uk #15babiesaday

Press release distributed by Pressat on behalf of Sands , on Tuesday 18 September, 2018. For more information subscribe and follow https://pressat.co.uk/ 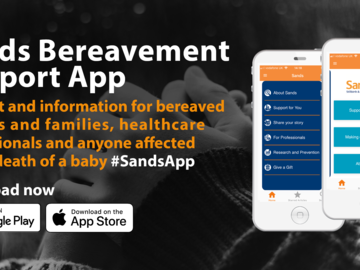 Innovative app launched to support bereaved parents, families and professionals in the UK