News provided by Open Cages on Thursday 12th May 2022

Almost 80% of Brits back a fur import ban, the government cannot continue to ignore that fact.

Animal welfare charity Open Cages has published footage from the last remaining mink farm in Bulgaria – a country which exports fur to Britain. The footage shows animals with open wounds, dead bodies left in cages, escaped mink running free, and generally filthy conditions on this farm which, according to the Bulgarian Mink Breeders’ Association, is certified by WelFur, a fur industry-run ‘welfare’ scheme.

The footage has been released after the UK Government abandoned its plans to include a fur import and sales ban in the Animals Abroad Bill announced in the Queen’s speech this month, reneging on its Action Plan for Animal Welfare commitment to act. Despite having banned fur farming in 2003, Britain continues to import millions of pounds worth of fur from fur farms overseas, including Bulgaria. Animal charities including Open Cages and Humane Society International/UK argue that this clear double standard must end, a recent opinion poll shows that 77% of the British public support a ban.

Investigators made multiple visits to the farm in Madzherito throughout late 2021, where around 100,000 animals are killed every year for their fur. The footage, which is being published together with Bulgarian animal protection organisation Nevidimi Zhivotni (Invisible Animals), shows mink with severe wounds, dead animals lying in cages, and animals running free who have escaped from filthy, broken cages. The investigation adds weight to concerns raised for years by Bulgarian animal welfare groups about the poor welfare conditions on the farm, as well as its negative impact on local communities due to escaped mink.

Connor Jackson, CEO & Founder of Open Cages, said: “It’s clear that on this farm, like any other fur farm, animals are suffering. The place is in a total state of neglect and chaos: the cages are broken and covered in waste, there are cobwebs and dirt above and below the cages, seemingly old food being left to rot on the cages. Behind the idyllic image of a professional, modern and welfare-certified farm, these animals must endure open wounds and unending misery all for a piece of meaningless fur: the kind that continues to be sold on the British high street.”

The problems shown in the footage — untreated injuries, dead animals, escaped mink — back the claims by animal welfare specialists that it is impossible to guarantee adequate welfare conditions for mink in a commercial farm setting.

Despite clearly exhibiting poor animal welfare conditions and distressing evidence of animal suffering, the fur farm appears to be certified by the fur industry’s certification scheme called WelFur. “WelFur” is an entirely voluntary scheme run by the fur industry which attempts to ascribe dubious welfare scores to battery-cage fur farm systems. Veterinary experts have long criticised the scheme as fur-industry PR spin, and veterinarian and Professor Emeritus, Bo Algers, warns that the WelFur scoring scheme allows for the masking of serious cases of individual animals suffering from poor welfare.

Claire Bass, executive director of Humane Society International/UK and coordinator of the #FurFreeBritain campaign for a UK fur import ban, said: “We’ve heard so many warm words from the UK government about ‘Brexit benefits’ for animals, and ‘raising the bar on animal welfare and taking the rest of the world with us’ but so far they are just that, words. As long as the UK is a part of the global fur trade, we are 100% complicit in the unimaginable suffering exposed on this farm in Bulgaria, and so many other fur farms where investigations show the abject misery of animals caged and killed for their fur. Almost 80% of Brits back a fur import ban, the government cannot continue to ignore that fact.”

The video evidence of animal suffering at this farm was so alarming that after its release in Bulgaria, the Bulgarian Minister of Environment and Water, Borislav Sandov, has issued a draft order seeking to ban the breeding and import of American mink under the Biodiversity Act due to the threat to native species from escaped mink.

According to the Bulgarian Food Safety Agency, Bulgaria breeds 120,000 mink annually. HM Revenue & Customs statistics show that from 2015-2020 inclusive, the United Kingdom imported £11,039 of fur from Bulgaria. Although Bulgaria is not considered a major exporter of fur to the UK, UK imports nonetheless represent the suffering and death of many thousands of animals.

Photos from the farm: here.

Press release distributed by Pressat on behalf of Open Cages, on Thursday 12 May, 2022. For more information subscribe and follow https://pressat.co.uk/

A mink in a filthy, barren cage. 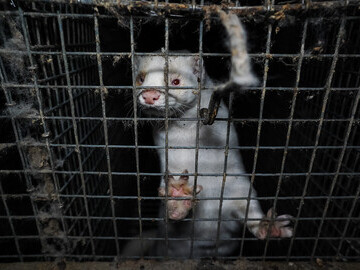 A dead mink left to rot in the cage. 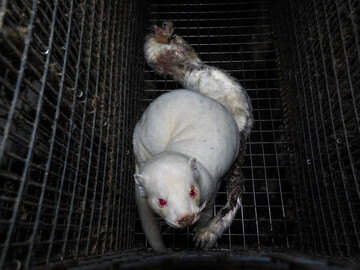 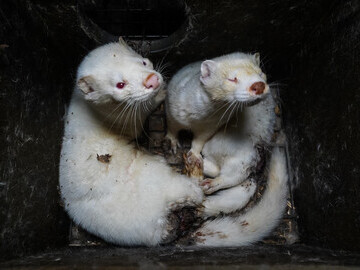 Mink with half eaten tail. 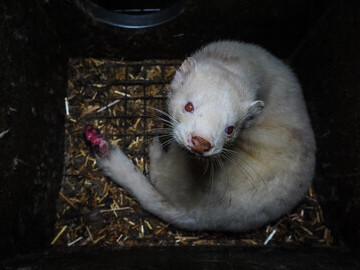 Mink with open wound from cannibalism. 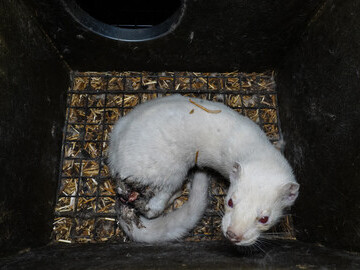 Mink in filthy cage with old food left to rot. 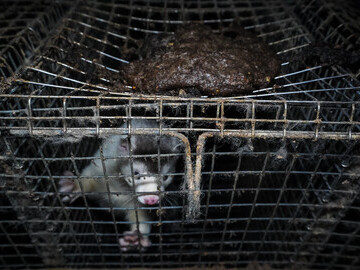 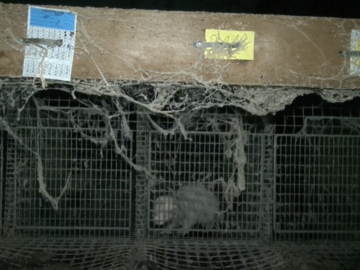 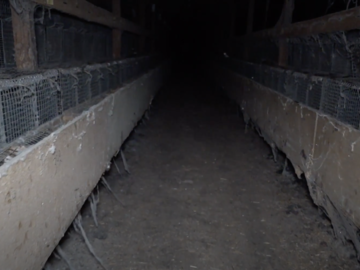