Helen’s biggest challenge yet as she takes on marathon

Living with tinnitus during a global pandemic has been challenging, so I decided to put that challenge to good use

Helen McElhone, 46 from Beeston, Nottingham, is set to complete her first ever marathon as she trains for the virtual Virgin Money London Marathon on 3 October. Helen is running in support of the British Tinnitus Association (BTA), a charity that is close to her heart as she lives with tinnitus herself, a debilitating condition that affects 127,000 adults in Nottingham and Nottinghamshire alone and one in eight nationwide.

Helen shared “I have lived with bilateral tinnitus for over 15 years. No huge explanation, it just sort of 'crept up on me' and like most of us I just 'get on with life' and do my best to cope with it. It wasn't until a colleague of mine started struggling with her tinnitus that I really talked to anyone about it. It really helped me connecting with someone else who knew what it was like. She told me about the BTA and I became really interested in their work and the support they offer to so many.”

The British Tinnitus Association’s vision is “A world where no one suffers from tinnitus” which Helen fully supports. She is hoping to raise vital funds and awareness to make sure people can access the support they need now, and fund future tinnitus research, to ultimately find a cure.

She shared “Living with tinnitus during a global pandemic has been challenging, so I decided to put that challenge to good use and am taking part in the Virtual London Marathon on 3 October 2021. To date I have managed 10km runs, so this is a huge 'step up' for me! I will be doing it for all those people who struggle with their own 'silence'.”

Please cheer Helen on by donating to her fundraising page at justgiving.com/fundraising/helen-mcelhone, or visit tinnitus.org.uk/challenge-yourself to take part in your own challenge. 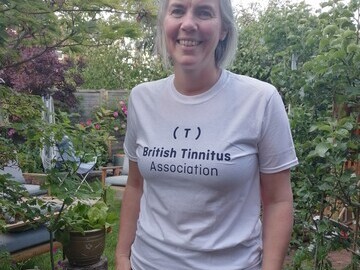 Helen’s biggest challenge yet as she takes on marathon