Hat-trick of awards for Marie and Jack Shapiro Prize winner!

an accessible, evidence-based intervention that is not currently available but can truly transform health care services.

(Interview and photo opportunities are available)

September 2019 The British Tinnitus Association (BTA) has presented the prestigious industry award the Marie & Jack Shapiro Prize for the third year in succession to a team of clinicians and researchers led by Dr Eldré Beukes, a Research Fellow at Anglia Ruskin University (ARU).

The Shapiro Prize was presented at the BTA’s 26th Annual Conference in London, which was attended by audiologists, hearing professionals, researchers and BTA members. It was awarded for the paper “Effectiveness of Guided Internet-Based Cognitive Behavioral Therapy vs Face-to-Face Clinical Care for Treatment of Tinnitus: A Randomized Clinical Trial.”

The winning paper was chosen from a shortlist of 30, which is record number of eligible papers. The judging panel was formed of the BTA’s Professional Advisers’ Committee.

The judges said: “This study focused on cognitive behavioural therapy (CBT) for tinnitus, which is the most effective evidence-based treatment available, but only available to a minority of those who need it. More recently, internet-based CBT has been developed as a way of making this treatment available to more people. For the first time, Beukes and colleagues have shown in a randomized controlled trial that the internet-based treatment is as effective as face-to-face treatment, which may have major implications for providing effective treatment to many more people than presently available.”

Dr Eldre Beukes said: “It has been such a privilege being involved in this research and seeing the positive effects in helping those with tinnitus. We are so pleased and delighted to win this prize! It is a huge honour receiving it three years in a row. We want to thank the British Tinnitus Association for their support as it encouraged us to keep working at this important research aimed at improving the lives of those with tinnitus.”

David Stockdale, Chief Executive of the British Tinnitus Association, said: “We are delighted to award Dr Beukes and her team the Marie & Jack Shapiro Prize for an unprecedented third time in a row. It indicates the real potential for iCBT as a tinnitus treatment which has obvious clinical benefits and the ability to improve the quality of life for people with tinnitus.

He adds: “The competition was tough this year as there were a record number of research papers in the running. The increased number of eligible papers year-on-year, and progress being made in tinnitus research is very encouraging to see, and offers hope as we drive progress towards a cure.”

The Marie & Jack Shapiro Prize is given each year at the BTA Conference to the piece of published research, by a UK based author, ‘most likely to result in improved treatment or public awareness of tinnitus,’ that was published in the last calendar year. The prize is named after the late Jack Shapiro, the founder of the British Tinnitus Association, and his wife Marie, who both played an important role in the establishment of the charity and in raising awareness of tinnitus. 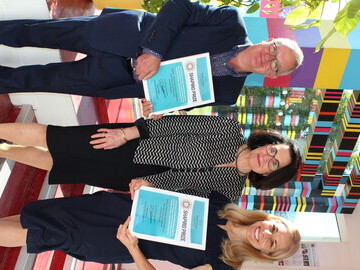 Hat-trick of awards for Marie and Jack Shapiro Prize winner!