HRH The Prince of Wales has become Patron of the Game & Wildlife Conservation Trust (GWCT). The Prince of Wales follows in the footsteps of his father HRH The Duke of Edinburgh, who was involved with the Trust for 56 years, first as President (1965-1973), then as Patron (1973 until his death in 2021).

GWCT President Lord Salisbury KG KCVO PC DL said: “We are honoured and delighted that His Royal Highness has agreed to take on the role of Patron of the Game & Wildlife Conservation Trust.

“Like HRH The Duke of Edinburgh, The Prince of Wales has long taken an interest in the work of the Trust developing and promoting science-based game and wildlife management techniques for the benefit of biodiversity in the British countryside. (The Prince of Wales served as President of the Trust between 1981 and 1987.) We greatly look forward to working with him in the coming years.”

The Prince of Wales’s interest in the countryside and farming is well-known, with a particular focus on areas of research in which GWCT scientists are playing a key role, such as carbon-capture and nature-based solutions to the climate crisis. His Royal Highness takes an active interest in several projects in which the GWCT is involved, including wild grey partridge and curlew conservation. The recently established Curlew Recovery Partnership England was born out of Curlew Recovery Summits hosted by His Royal Highness, and its partners include the RSPB, the British Trust for Ornithology, the Duchy of Cornwall and the GWCT.

Since the 1950s the GWCT has run a programme of research and monitoring of wild grey partridges, songbirds and invertebrates on the Sandringham Estate, originally under the auspices of The Duke of Edinburgh. The improvement of the farmed environment continues. In addition to wildlife monitoring and insect sampling, the Trust has been assessing the quality of wildlife habitats and evaluating the influence of organic farming on biodiversity.

GWCT Chairman Sir Jim Paice DL, said: “By agreeing to be our Patron, The Prince has acknowledged the importance of GWCT’s work. GWCT recognises that wildlife needs management and our research shows that plenty of diversity can be provided alongside commercial farming.” 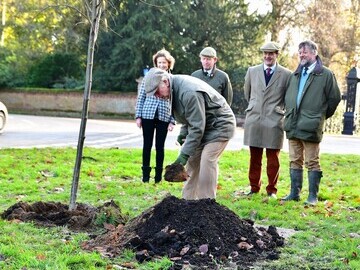