For Yet Another Year, Fibank Is a Favorite Brand Among Banks in Bulgaria

Fibank (First Investment Bank) won the Financial Institutions category of the only consumer ranking in Bulgaria, MY LOVE BRANDS. More than 40,000 consumers supported their favorite brands, with Fibank becoming a winner for the fourth time since the beginning of the ranking.

The competition was held for the eleventh consecutive year by the Business Lady Magazine. Consumers voted in 3 stages, with the three best-performing brands competing in the finals. Fibank was the undisputed leader in the Financial Institutions category, leading convincingly over its competitors. An important feature of the ranking is that it does not rely on a jury for the voting and nominations, but only on consumer preferences.

The favorite brand award for 2019, which Fibank received also in 2011, 2012 and 2018, is the logical result of the Bank's consistent efforts towards developing innovative and customer-friendly products and services.

Press release distributed by Pressat on behalf of Fibank, on Thursday 18 July, 2019. For more information subscribe and follow https://pressat.co.uk/

Fibank Is a Favorite Brand Among Banks in Bulgaria 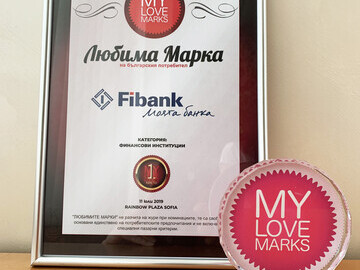 For Yet Another Year, Fibank Is a Favorite Brand Among Banks in Bulgaria