Irish Imam is wrong to say FGM should be recognised

Ali Selim, a spokesman for the Islamic Cultural Centre of Ireland in Clonskeagh, said in an interview with a newspaper for doctors that “female circumcision” was provided for in Islam. He claims that there is a difference between “female circumcision” and Female Genital Mutilation (FGM). He is totally wrong. The two are the same and are a brutal mutilation of the female body which causes untold psychological damage to women subjected to it.

FGM is an ancient practice which originated in pre-Islamic Africa. It is a common practice in some countries in Africa and the Middle East. Inhabitants of those countries practice FGM regardless of their faith. For example, Ethiopia is a predominantly Christian country and yet FGM is a common practice. Somalia is a predominantly Muslim country and FGM is practiced there. In Nigeria, Muslims and Christians are almost equal in numbers and both practice FGM.

Female circumcision or FGM is against Islamic teaching. Not only is female circumcision not practiced in most Muslim majority countries such as Pakistan, India and Bangladesh, but in fact is not even known in those countries and, when it is mentioned, people express astonishment.

The Holy Quran also says that the devil will lead people astray and they will mutilate Allah’s creation (4:119). This is one reason, among others, why Muslims have expressed opposition to post-mortems.

FGM is a heinous crime against women. Those who engage in it must be most severely punished.

Percentage of girls and women aged 15 to 49 years who have undergone FGM, by country (UNICEF) 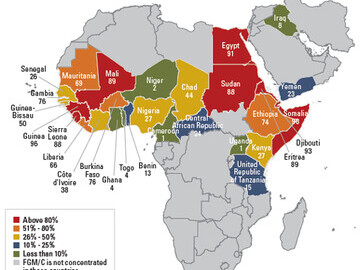