Bereaved parents at Sands (Stillbirth and neonatal death charity) support groups across the North West of England have joined forces to provide funds to buy a CuddleCot for the Bridgewater Community Healthcare NHS Foundation Trust.

Julie McIntosh, Midwifery Community Coordinator at Bridgewater Community Healthcare NHS Foundation Trust in Widnes who works with parents whose babies have died before, during or shortly and after birth, contacted Sheryl McMahon, Sands’ Regional Network Coordinator for the North West of England to ask for the charity’s help.

The Sands support groups in the North West donated £1,570 between them to buy a CuddleCot which is a Moses basket with a refrigerated base that allows bereaved parents to spend extra precious time with their baby.

Julie McIntosh, Midwifery Community Coordinator at Bridgewater Community Healthcare NHS Foundation Trust, said: “I approached Sands to ask for their help to buy a new CuddleCot. The cots are a huge benefit to parents who have suffered a stillbirth or a neonatal death, to spend valued time with their baby.

“A CuddleCot is a key piece of equipment in supporting families after the death of a baby, which slows down the necessity to make decisions quickly and allows more families the chance to take their baby home and to grieve in their own way and at their own pace.”

Julie is currently working in the North West Coast Strategic Clinical Network whose aim is to reduce stillbirths. As part of this essential work she is developing guidance for midwives who care for women who have suffered a stillbirth.

Erica Stewart, Bereavement Support and Awareness Specialist at Sands, said: "CuddleCots can help with the healing process. When your baby is stillborn or dies neonatally it's a huge shock. You have expectations of what you will do with your baby, taking them home, bathing them, dressing them, reading them stories and introducing them to everyone, and it's all snatched away from you. It's the most devastating loss. But still being able to do those things, albeit in a different way, can create memories."

A presentation of the CuddleCot from Sands took place at the Bridgewater Community Healthcare NHS Foundation Trust in Caldwell Road, Oaks Place in Widnes on Tuesday 9 January.

Local Sands groups offer support to bereaved parents whose baby has died before, during or shortly after birth and they meet on a monthly basis. For further information call the Sands Freephone Helpline on 0808 164 3332 or email: helpline@sands.org.uk

Sands is the leading stillbirth and neonatal death charity in the UK. They work nationally to reduce baby deaths through promoting better maternity care and funding research. They have a programme of training and a wide range of resources designed to support professionals to improve the bereavement care they provide following the death of a baby, and they provide a comprehensive bereavement support service both nationally through their helpline and locally through around 100 regional support groups based across the UK.

Further information can be found at www.sands.org.uk

Press release distributed by Pressat on behalf of Sands , on Thursday 11 January, 2018. For more information subscribe and follow https://pressat.co.uk/ 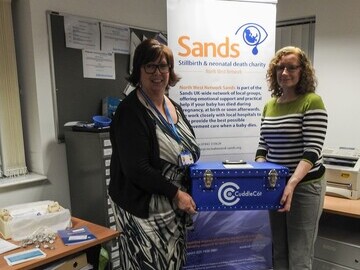 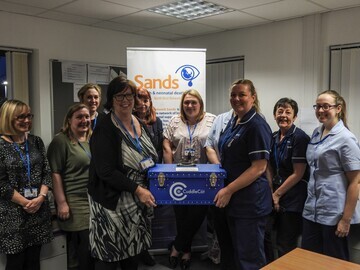