Charity staff go the extra mile (or 26!) to support people with tinnitus

It was only being part of the BTA team, all running separately but fundraising together, that kept me putting one foot in front of the other.

British Tinnitus Association staff members Colette Bunker, Angela Pollard and Jess Pollard completed their first ever marathons on 3 October as they took on the Virgin Money Virtual London Marathon for the charity they work for. The British Tinnitus Association (BTA) is dedicated to supporting people living with tinnitus, a debilitating condition that affects 1 in 8 adults in the UK.

Fundraising Officer Jess (25) shared: “What a day!! I’m still on a post-marathon high after completing the virtual London Marathon, and feel very proud to been part of the BTA team this year. The 26.2 miles were tough, especially after being ill just four days before the event, but knowing we were supporting the tinnitus community kept me going! I definitely couldn’t have done it without the support of my running buddy Angela, our in-person and virtual cheer team. Thank you SO much to everyone who cheered us on, shared our pages and donated to help us raise money for the BTA.”

Angela (55) is the Membership Administrator for the BTA and she said, “It still seems a bit surreal that I finished the 26.2 mile challenge in less than 6 hours. Without the massive support of a London crowd cheering us on, running along the Caldon canal out of Stoke seemed a long way from the real thing. And really tough when it pelted it down! It was only being part of the BTA team, all running separately but fundraising together, that kept me putting one foot in front of the other.”

The British Tinnitus Association’s vision is “A world where no one suffers from tinnitus” which Colette, Angela and Jess are passionate about. As Head of Services for the BTA, Colette’s work focuses on developing services that improve the lives of people with tinnitus through information, advice, emotional support and peer support.

Colette (34) who finished the marathon in 4 hours, 28 minutes and 3 seconds revealed, "I was amazed at how it went the day of the marathon. My only goal was to get through it, but I achieved a time I was proud of in the end too. What helped the most was having my dad, who's about to turn 69, join me the whole way, it was great to have the company and helped keep the pessimistic thoughts at bay. My family were all there on the day to cheer us on and feed us jelly babies and they put on quite the show! My sister-in-law organised decorations, props, and lots of BTA materials to help spread the word about tinnitus to everyone interested. Plus, my brother joined us for some of the final kilometres to keep us going when speech failed us. It meant such a lot to be part of the incredible BTA marathon running team, there was great camaraderie throughout and a shared sense of purpose that helped drive us all with both fundraising and the event itself. I can't believe how well we've all done, and I was incredibly proud to be part of such a dedicated team to help raise those vital funds for tinnitus services and research."

Please help Colette, Angela and Jess celebrate their achievement by donating at justgiving.com/team/btavirtuallondonmarathon, or email fundraising@tinnitus.org.uk take part in your own challenge. 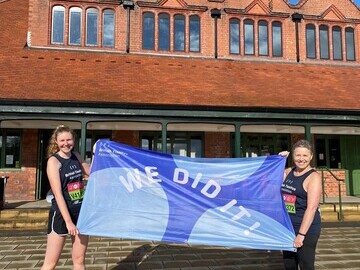 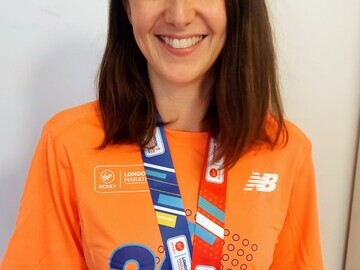 Charity staff go the extra mile (or 26!) to support people with tinnitus