“In times of such volatility in the marketplace it has never been as important to understand the true costs of producing driven shooting."

In association with Savills

A SURVEY which assesses and compares the performance of shoots across the UK is now open for submissions from shoots of all sizes.

The 2021/22 season Game and Conservation Benchmarking Survey, from Savills and the Game & Wildlife Conservation Trust (GWCT), compares a shoot’s operation against similar shoots and highlights the areas in need of improvement and refinement.

In return for completing the survey by 27 May 2022, contributors will receive a detailed report comparing their operation’s vital statistics against similar sized shoots. It contains exclusive statistics and trends which are not published elsewhere.

Past participants in the free shoot benchmarking exercise have successfully used their reports to revise their charges and control their costs.

The report allows them to compare their shoot operations against similar shoots, helping to identify areas for improvement and refinement. It can answer questions such as: Are your poult or feed costs too high or charge rates per bird too low? Are your permanent and casual staff rates of pay competitive to attract the best people? How do your percentage returns for the season compare with other shoots? How do your environmental efforts measure up?

"If good records are to hand the survey is easy to complete,” said previous participant John Harris of the Brackenburgh Estate. “The resulting publication is a comprehensive document detailing and comparing costs and revenue for a range of varied shoots. I have found it a most valuable document for the management of our shoot. The survey was part of our submission for the Purdey Awards for Game Management and Conservation for which we were highly commended."


Each participating shoot receives a detailed report from Savills’ research team. It is totally confidential, and no shoot is identifiable in the published results.

“In times of such volatility in respect of input costs, feed prices and general volatility in the marketplace, it has never been as important to understand the true costs of producing driven shooting. To fail to measure the fluctuating costs and adapt the pricing structure accordingly leaves some operators at risk of significant losses,” said Savills director Paul Hutchinson.

Roger Draycott, GWCT head of advisory services, said: “The Game and Conservation Benchmarking Survey also collects a lot of useful information about the environmental work that shoots are involved with. As rearing and releasing are increasingly under the spotlight, the collection and analysis of these data take on greater importance.”

Anyone wishing to complete this survey should visit gwct.org.uk/game/game-and-conservation-benchmarking-survey/

Press release distributed by Pressat on behalf of Game & Wildlife Conservation Trust, on Monday 9 May, 2022. For more information subscribe and follow https://pressat.co.uk/ 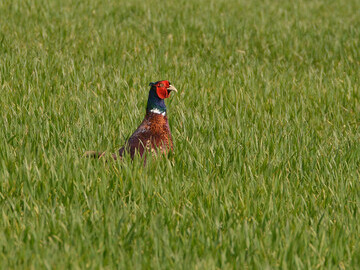