The final cook-off of the Asian Restaurant and Takeaway Awards (ARTA) was held at Hackney City College in London on Monday, August 13, 2018. Chefs shortlisted from greater London and neighbouring areas participated in the event that was graced by the restaurant directors, celebrities, executive chefs and culinary teachers from colleges and universities. Speaking on the occasion, the guests said many of the chefs have shown their talents in the art of cooking. Making fusion with exotic flavours of Bangladeshi and Indian food, creative young chefs are taking it to a whole new level of Britishness that will create new prospects for the British curry industry.

Preparation of the Cook-Off started after the judges’ introduction and briefing of the competition process. Then the chefs started cooking for an hour.

The activity was coordinated by M A Munim Salik, the CEO of ARTA and the founder of its strategic partner ChefOnline. The main judges were the chef lecturer of the Cambridge Regional College, Graham Taylor and executive chef Chand Rahman. The secretary of BCA (Bangladesh Caterers’ Association) Oli Khan was an observer at the event. Other judges include the cooking lecturer of Nescot College, celebrity chef Kuldip Syng, Kashmira Patel from the Oxford Brookes University, mayor of Corby Borough Council, Mohammed Mujibur Rahman, and Royal Society of Public Health expert, Cardiff counselor Dilwar Ali.

During the competition, judges went around the huge kitchen, asked about various dishes and features of those food items from different chefs and observed cooking styles and health standards as well. Some of the chefs cooked their healthy and signature dishes with great enthusiasm.

Chef lecturer of Cambridge Regional College and an ARTA judge, Graham said, “Chefs themselves are trying their best to do something exceptional and the owners are helping them. The industry will thus succeed more. Besides, I am very happy to see the presentation, quality and specialties of several dishes today.”

“The industry has changed a lot in the past few decades and created a new trend and so will it bring new prospects,” said the celebrity chef Chand Rahman. “Organising this, ARTA is playing a role in the overall development of the industry,” he added.

ARTA’s founder & CEO M A Munim (Salik) said, “Regional cooking Competition ended with this final cook-off event in London today. The Grand Finale will be held on the 30th September, where you will meet British celebrity, presenter of BBC’s Got to Dance, Ainsley Harriott and Bollywood melody queen, Alka Yagnik.” 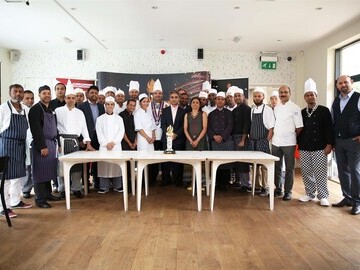