Air Ambulance Week 2021, 6th-12th September, is in full swing and local charity, Essex & Herts Air Ambulance (EHAAT) is onboard, celebrating and raising awareness of its life-saving work in the local community.

The week is organised by Air Ambulances UK, and EHAAT is joining with the other 20 air ambulance charities around the country in a campaign called Every Second Counts and Every Penny Matters.

The campaign highlights how air ambulance charities such as EHAAT rapidly deliver advanced life-saving pre-hospital care directly to the side of patients with life-threatening injuries or medical emergencies; essentially bringing the A&E department to the patient when every second counts.

In 2020 EHAAT attended 2,366 life-saving missions across Essex, Hertfordshire and the surrounding areas, forming an important part of the emergency services supporting the NHS. Every penny matters as each mission costs on average around £2,200.

Because every second counts, each of EHAAT’s critical care team consists of a pilot and co-pilot, a pre-hospital care doctor and a critical care paramedic, who once on scene can deliver advanced clinical care that is normally only found in the hospital emergency department. Once stabilised, the patient will be taken by air or land to the most appropriate hospital for their needs.

Natasha Robertson, Fundraising Manager at EHAAT said, “Essex & Herts Air Ambulance is calling on members of the public to do something amazing this Air Ambulance Week and donate to help us to continue to provide life-saving care. Visit www.ehaat.org/aaw21 to leave messages of support for the crew and to make a donation.”

A patient that has experienced first-hand the life-saving work that EHAAT provides is Andrew Bord.

Andrew was taking a shower when he blacked out and fell and had a seizure. Nobody knows if the seizure was because he banged his head, or whether his seizure began as he lost consciousness.

When the Essex & Herts Air Ambulance team arrived, they quickly identified that they had to treat the large wound on Andrew’s head and give him a pre-hospital anaesthetic in order to take over his breathing. This would start the process of reducing his brain injury and prevent, as best as possible, any further harm.

Once stabilised, Andrew was airlifted to a specialist hospital, The Royal London, which only took six minutes in the helicopter, whilst Emma his wife went by a blue lighted Police car which took nearly an hour.

Andrew’s wife Emma said: “Essex & Herts Air Ambulance is an utterly amazing service, and I am so thankful to them for saving my husband’s life. I can’t thank them enough for everything. The doctors on the helicopter, the speed of their work and the decisions they made were simply amazing.”

Commenting on Andrew’s story Natasha said, “I am so pleased that Andy has made a speedy recovery. Andy’s story is one of unfortunately many and really highlights the importance of your local air ambulance and the amazing life-saving service they provide. During Air Ambulance Week we aim to raise awareness that we are a charity and unlike NHS emergency services, we receive limited direct funding from the Government and none from the National Lottery.”

“Keeping this life-saving service operational would not be possible without the generosity and goodwill of people and businesses across Essex and Hertfordshire. I would also like to thank our sponsor, Research Runner, a lead generation business based in Harlow, who is supporting us during Air Ambulance Week. If you are able to support us during the week and would like to make a donation, please visit www.ehaat.org/aaw21 because every second counts and every penny matters.”

Andrew and Emma Bord with family 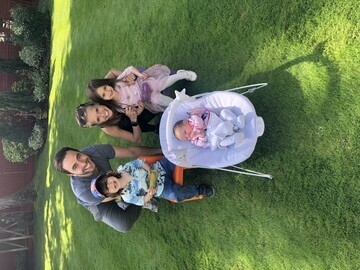 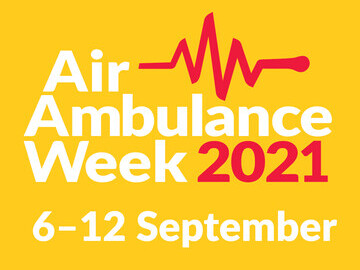